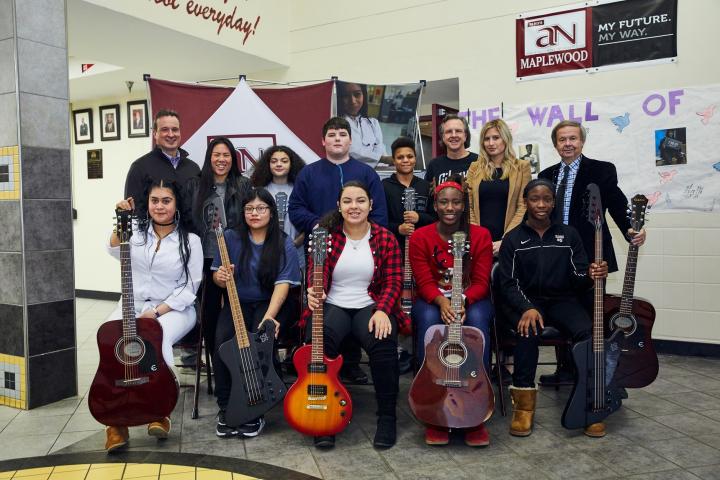 Gibson Gives, the philanthropic arm of Gibson, the Nashville-based guitar manufacturers, exceeded expectations when it raised over US$2.5M worldwide to the point where it’s now expanding its charities.

Supporting a mandate to create, develop and support non-profit organizations to advance musicians, youth-focused education and wellness initiatives, the Gibson organization has directed some of its brands to follow suit, announcing  the formation of three more charities to serve under its umbrella: Epiphone Empowered, Kramer Kares and Mesa Mission.

With 100% of all donations with this worldwide initiative applied towards giving the gift of music, Gibson Gives has also revealed the formation of two new groups – The Gibson Gives Influencers and The Gibson Gives Artist Advisory Council  - to furnish thought leadership, foundation and funding strategy, as well as philanthropic opportunities for the benevolent foundation.

Gibson Gives also recently launched TEMPO: Training and Empowering Musicians to Prevent Overdose. It’s a collaborative program between MusiCares, Harbor Path and seven additional non-profits to save musicians from opioid overdoses prompted by a year of confinement and COVID-19 closures.

When Gibson Gives relaunched in 2019 after its parent company bounced back from bankruptcy, the foundation committed to donating 1000 guitars in 1000 days to non-profits involved with music education, music wellness and musicians in need around the world. The foundation surpassed that goal with the donation of more than 2800 guitars in 700 days.

“It’s been a humbling experience and an honor to work with so many worthy music and health programs in need,” said Dendy Jarrett, Gibson Gives’ executive director, in a statement.

Gibson Gives is committed to working with musician-oriented charities like MusiCares, Keeping the Blues Alive, the Save The Music Foundation and others to help struggling musicians around the globe.

The charity is also committed to the Play It Forward program, offering urgent support to musicians, groups, charities and organizations that require immediate needs due to disasters like the recent Nashville tornado and bombing.

Gibson Gives also supports school music programs and students that have been disrupted by budget cuts, ranging from Playing For Change and schools in Mexico, the U.S., Europe, Africa, Spain, South America, Canada and more.

For established programs focused on physical wellness and mental health, Gibson Gives has supported the U.K. Teenage Cancer Trust, Guitars for Vets, the Ryan Seacrest Foundation, Women Who Rock and Keep-A-Breast, to name a few.

For Women In Rock, Gibson Gives raised over $45,000 last year for breast cancer research at Magee Women’s Research Institute; and placed and provided Gibson instruments and KRK studio gear in U.S. hospitals for recovering children, offering music lessons to help them cope with their illness and PTSD.

Gibson was established 127 years ago and artists ranging from Paul McCartney to Neil Young own and play Gibson guitars.