Gibson Donates Guitars to Musicians Without Instruments After Tennessee Tornadoes 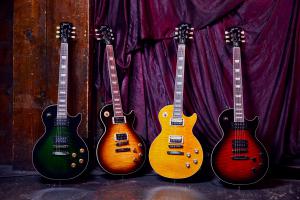 Gibson Gives, the charitable foundation behind Nashville-based guitar maker Gibson, is set to give musicians without instruments after the deadly tornadoes that struck Tennessee in early March to ensure they have guitars to continue their music-playing and careers.

Those without working guitars will receive new ones from the nonprofit wing of the guitar brand.

"Our goal is to get a guitar back into the hands of anyone who has had their guitar damaged or destroyed in the recent Tennessee storm. As a Nashville, Tennessee based company, we are also engaging with our artists and other partners to provide support across many areas," Gibson Gives executive director Dendy Jarrett said in a statement.

And damaged guitars do not need to be a Gibson brand.

The Gibson guitar donations follow severe storms and tornados ripping a path through central Tennessee, including parts of Nashville, leading to the death of 24 people and mass destruction of property.

The Gibson Gives foundation was launched in 2002 and, according to its website, has donated thousands of guitars worth over $30 million since then.

"As we look to the future for both Gibson Brands and the Gibson Foundation, we have an opportunity and an obligation to re-build with an aligned approach going forward. With that in mind, we’re transitioning our Gibson Foundation name to Gibson Gives to better reflect the vision and mission," the website adds.

The emergency guitar donations following the Tennessee tornados is an extension of the Gibson Gives charity-giving, which includes Notes For Notes, a nationwide program that started in California and designs, equips and staffs after-school recording studios inside Boys & Girls Clubs.

The Gibson guitar maker also donated 48 guitars and 19,000 string sets to Guitars For Vets, which helps returning US military veterans, some of whom have post-traumatic-stress-disorder (PTSD) learn the guitar for song writing.

Gibson, which was founded in 1894, also supports the Do It For The Love wish-granting foundation, based in Oakland, California, that helps people living with life-threatening illnesses, children with severe challenges and wounded veterans to attend live concerts.