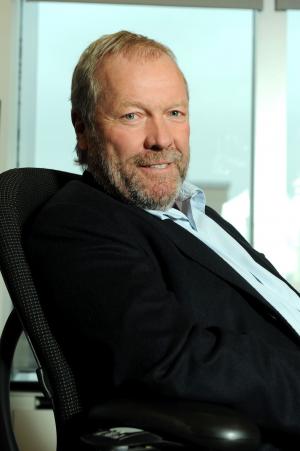 The award, presented at the Art Gallery of Ontario by Maison Birks, honours his work “as a leading Canadian philanthropist committed to integrity and impact.”

Gary’s company Slaight Music financially supports and guides Canadian musicians and the Slaight Family Foundation has donated millions of dollars to various causes, including $12 million earlier this year to 15 not-for-profits working to improve the lives of Canada’s Indigenous populations;  $11 million in 2016 to 11 child and youth-focused health charities; $7 million in 2015 to seven Canadian NGOs working around the globe; and $50 million in 2013 to five Toronto hospitals.

“We created that award specifically for him and we named it for him,” NKPR founder and APJ co-chair Natasha Koifman tells Samaritanmag. “The reason we called it the Changemaker is because he inspires change. If you think about all the different causes that he supports, both locally and abroad, it’s inspiring.

“He inspires all generations, if you think of the young artists that he really helps to develop, I wanted this to be an opportunity for them to see what they can aspire to be. I just feel like he truly deserves the Changemaker Award.”

APJ, which was founded by filmmaker Paul Haggis “to serve the poorest communities in Haiti with programs in education, healthcare, and dignity through the arts,” already has the Peace and Justice Activism Award, which this year will be given to musician Jackson Browne. Past recipients include actors Sean Penn and Susan Sarandon.  But APJ, which is based in New York but holds the gala annually during the Toronto International Film Festival, wanted a way to honour Canadians, especially because this year marks Canada’s 150th anniversary of confederation.

“We felt like we really should pay homage to Canada and look at who’s a local Canadian hero,” says Koifman.

The first person who sprang to her mind was Slaight.

“We’ve never honoured anyone locally, a Canadian, so that’s why we created this award initially. Moving forward, I don’t think there’s any real formula. We really do look at people as individuals and say, 'This person should be honoured and recognized for the impact that they’re making in the world.’”

Slaight doesn’t have to give a speech. Instead,  Toronto based radio and TV interviewer George Stromboulopoulos, who is on the board of APJ, is going to ask him questions, she says.

“The reason we decided to do it that way is because that conversation and that connection inspires change, inspires dialogue, inspires and motivates people to do more, whether its for Artists for Peace and Justice, or Haiti, or whatever you choose to give back to,” Koifman explains. “We felt that that kind of forum would make more sense in this respect and we wanted to change it up a bit.”

(Full disclosure: The Slaight Family Foundation is a supporter of Samaritanmag).