Funko’s Pops! With Purpose Is Its Latest Charitable Initiative 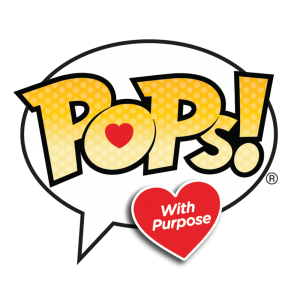 “Throughout Funko's history, community has been at the heart of all of our efforts,” said Funko president Andrew Perlmutter in a media release. “When fans decide to purchase and display a Pops! With Purpose, they are signifying their support for a cause that contributes to making the world a more kind and equitable place for all.”

Each Pops! With Purpose figure sold will feature a designated sticker and box art indicating that Funko has made a charitable donation to the organization.

Pops! With Purpose expands on Funko’s partnerships with new and existing philanthropic organizations. Since introducing its Funko Cares Program in 2018, the company has given back to the community through monetary and product donations.

“Funko is a natural, value-aligned partner for the It Gets Better Project,” said It Gets Better Project executive director Brian Wenke in a media release. “Through their queer interpretations of iconic characters known and loved by so many, Funko is sending a message to all LGBTQ+ young people that they are not alone — and that there is a broad, multi-faceted community here to support them.

“Funko’s unwavering commitment to sustaining our life-affirming resources, while fueling the joy of others, is an ideal combination with the capacity to positively impact young queer people everywhere.”

Funko also announced a partnership with the Make-A-Wish Foundation that’s set to begin next year. Make-A-Wish was founded and is headquartered in Phoenix, Ariz. and helps fulfill the wishes of children between the ages of two and 18 who have a critical illness.

“We know that wishes have the ability to help children build the emotional and physical strength they need to fight a critical illness,” said LuAnn Bott, vice-president of revenue partnerships and services for Make-A-Wish America, in the release.

“Through the sale of their wish-inspired Pop! figures, Funko will enable even more wish kids to experience the life-changing impact of a wish come true.”

“We are excited about our growing partnership with Funko as they clearly share our commitment to helping our military families not only start strong, but also stay strong as they serve our great nation and as they transition back into their civilian communities,” said Operation Homefront president and chief executive officer John I. Pray Jr. in the release.

“These collectibles will serve as a special tribute to this very deserving group of fellow Americans as we work to help them for all they have done in our nation’s time of need.”

"Rivet was built on the belief that young people have the power to lead social change today, not someday,” said Rivet CEO Eric Dawson in the release. “We partner with brands like Funko to fund and amplify the work of young people leading social change in their communities.

“And we could not dream of a better partnership to provide these young people with the visibility and reach they deserve."

The Breast Cancer Research Foundation (BCRF) has been a Funko Cares partner for two years, with Funko donations funding more than 1,500 hours of research. “Even as breast cancer cases around the world are on the rise, we’ve never been closer to eradicating this life-threatening disease,” said BCRF president and CEO and Myra Biblowit in the release.

“By partnering with BCRF, Funko is supporting groundbreaking, lifesaving science. Together, we will bring the end of breast cancer into focus.”