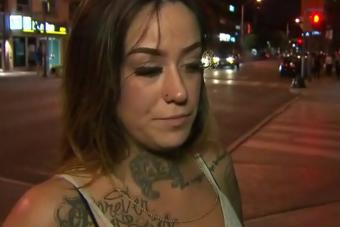 A GoFundMe campaign has been set up for Danforth shop owner Tanya Wilson who has been ordered to sanitize her Skin Deep Tattoo Studio at her own expense after sheltering and caring for two bleeding victims of Sunday’s shooting rampage.

Fifteen people were shot by the 29-old-year-old gunman, later identified as Faisal Hussain, who fired indiscriminately while walking along Danforth in Toronto’s Greektown. Two of the victims, 18-year-old Reese Fallon and 10-year-old Julianna Kozis, died.

The gunman was also found dead.

According to her own accounts in the media, as well as from other witnesses, Wilson had stepped out of her business when she heard the shooting. As she did, a woman and a boy, in obvious pain and bleeding, saw her open door and ran into her shop. After locking the door to her shop behind her, Wilson did her best to treat the wounds of the pair — mother and son — until first responders arrived.

In A CP24 television interview (see below), Wilson described the people who ran into her shop as "frantic" and proceeds to give the reporter a play-by-play.

According to the GoFundMe page, “her shop isn't allowed to open back up for business until she has cime [sic] scene cleaners come into her shop and clean it as it needs to have a high level of sterilization done to it due to the fact that there are mass amounts of blood all through her shop and because her shop isn't like a general business, it's a tattoo shop.

“The unfortunate thing about this event is that on top of her opening her doors to help save these 2 peoples [sic] lives the Metro Toronto Police are saying that she must foot the bill for this service as they can not [sic] do anything financially to help her.

“I have seen the shop personally and I'm at a loss for words,” Tee added. “I've been with her the since the incident happened and she is not mentally and emtionally [sic] well. I can only imagine what she went through. The donation amount isn't even close to the loss of money that she will lose until her shop reopens again, but I just think she shouldn't have to pay all of it if any period after doing such a great deed.”

WATCH WILSON'S INTERVIEW WITH CP24 BELOW (AROUND THE MINUTE MARK):