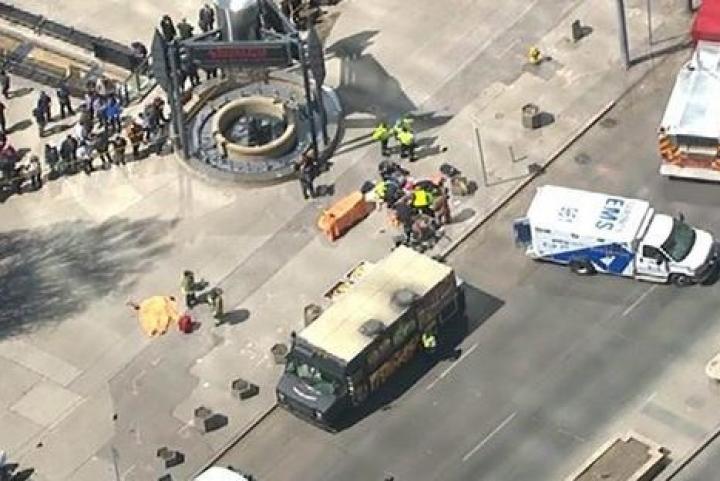 A fund created by volunteer organization Canada Zakat by DawaNet after the murderous van rampage Monday that killed 10 people and injured 14 has raised $160,000 in just two days. The goal is $1 million, which will go towards the “funeral expenses of the victims who lost their lives,” it says on the GoFundMe page.

Alek Minassian, 25, of Richmond Hill, Ontario, who plowed through pedestrians in a rental van on a stretch of Yonge Street between Finch and Sheppard avenues, has been charged with 10 counts of first degree murder and  13 counts of attemped murder (a number that could change). He was arrested by Const. Ken Lam.

DawaNet is a "Canadian Muslim community empowerment, engagement, and education organization," based in Mississauga, Ont.

More than 2680 people have contributed to the fund since it was set up on April 23.

Samaritanmag reached out to the media contact on the page for more information on how the surplus from the funeral expenses will be used, since the goal is $1 million:

"We're in talks with the Mayor's office and are discussing consolidating our efforts with the city's own fundraising initiative," communications officer Sana Khawaja told Samaritanmag in an email "Nothing's finalized but most likely we'll be merging soon. All proceeds, 100%, will go to Victim Services, a recognized and trusted source that will distribute the future donations to victims and their families."

As the money continues to pour in, and more information is released about the victims — deceased, injured and witnesses — updates on the distrbution of the funds will be posted on the GoFundMe page as well.

The page also states "Stay tuned for updates through www.facebook.com/CanadaZakat.

Previously Canada Zakat has “successfully spearheaded fundraising campaigns for the Quebec Mosque Shooting victims and for Aymen Derbali and rasied over $800,000 during the shooting at a Quebec City Mosque,” according to information on the GoFundMe page.

A fund for another high-profile Canadian tragedy, the Humboldt Broncos hockey team bus crash that claimed 14 lives,  raised more than $15 million in 18 days. That was set up by Humboldt, Saskatchewan resident Sylvie Kellington. The fund was taken over by Humboldt Broncos Jr. Hockey Assocation Inc. and the GoFundMe page closed, as of April 18.

Khawaja tells Samaritanmag: "Our goal is $1M, if it goes to that amount, we'll have reached our fundraising goal."