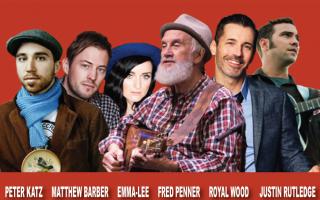 Beloved children's entertainer Fred Penner and a cast of musical friends will be taking people down memory lane to benefit the Canadian Music Therapy Trust Fund on March 11.

The event, titled "A Night Of Music Memories," takes place at Toronto's Berkeley Church and features Penner along with acts like Justin Rutledge, Royal Wood, Matthew Barber, Peter Katz, Emma-Lee, Tomi Swick, Spencer Burton and Bellwoods. Throughout the night, the acts will play a number of their own songs, as well as some special duets and covers. One hundred percent of the proceeds will be going towards the Music Therapy Trust Fund.

Music therapy has shown to be a valuable tool in a number of different ways. Some of the areas where the Music Therapy Trust Fund have used their skills and knowledge have included working with stroke and Parkinson's victims, people with brain injuries, helping children with autism and Asberger's Syndrome to communicate, and working with palliative care patients on things like relationship completion.

Penner, who's acting as the master of ceremonies for the evening, has seen firsthand how music can help reach people.

"I was playing in a seniors centre a year ago and it's pretty tragic when you go into a home and you see people wheeled into an area and they're totally catatonic and they've got no expression, their heads are bent over, they don't look terribly comfortable and there's no communication in at all," Penner tells Samaritanmag. "When I do events like that, I ask where they're from, what country, what language, to get an idea of who they are and I go into my memory bank 'cause I know thousands of songs, and I go, 'Here, I've got one that might connect with this person.'

"I'm from German background, German-Mennonite, and there was one fellow at a particular event who was totally disconnected and I started singing an old German beer drinking song and his head came up, his eyes opened and with this great baritone voice he started singing the song with me and my heart almost stopped for a moment because it was such a fabulous connection.

"It was a very special moment to be able to facilitate bringing him out of his revery for a moment. And that can happen with anybody. Not just seniors. That's the value of music in this world, to connect you to your memories and your thoughts and feelings."

The Music Therapy Trust Fund tries to facilitate experiences like the one Penner mentioned in two ways. First, they help fund clinical research into the ways music can aid therapy. Second, they support on-the-ground plans and programs by music therapists across the country.

"Things we've done in the past to support research include investing in having a music therapist be part of a stroke and Parkinson's research project or a neurological research project that involves studies on music and the brain. This happens at universities across Canada. We've worked in pretty much every province. In terms of our clinical grants, that's how we provide seed funding for music therapy programs to happen in hospitals or schools or clinics across Canada," says Derek Spooner, executive director of Canadian Music Therapy Trust Fund.

"The music therapist goes in and proposes a project, let's say an Alzheimer's choir, doing a choir project with the Alzheimer's Society for instance, and the therapist would go there and the idea would be that the hospital or centre would see the value in this work, and then would consider bringing in the therapist for a certain portion of the week."

Scott Rondeau, the producer of the concert event, also firmly believes in the power of music therapy. Rondeau directed the music therapy documentary film The Gift Of Music and has seen the power sound can have in helping people.

"I was always a huge music lover and I was always a geek when it came to music, I love it, and when I realized that scientifically you can help people with music I was blown away by that," Rondeau says.

"So from then on I donated my time and services to that; I did a documentary on the subject matter. Now I'm huge music therapy supporter. I believe it. I've seen it work. I think it's an amazing profession. I think it's a misunderstood profession and an underfunded profession for sure. And the more people that know about it and the more that know what it is, that we could either raise more money in the private sector or possibly get it funded in the public sector. These are all hopes of mine by doing a show like this."

As for the actual show, Penner says there will be several memorable moments. He's going to duet a Cat Stevens song with Royal Wood, play "Ghost Riders In The Sky" with Matthew Barber and do the Carole King-written James Taylor hit "You've Got A Friend" with Emma-Lee.

"I'm really excited about doing those pieces along the way," says Penner, who's also promising a number of other evocative covers and musical combinations.

Tickets are $45 in advance and $60 at the door (subject to availability) and can be purchased via Ticketfly.

Watch an excerpt of The Gift Of Music documentary: