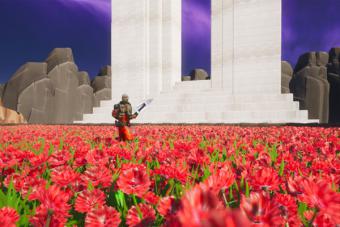 The island was launched ahead of Remembrance Day on Nov. 11, the date set honour those who've fallen in the military service of their country. Fortnite users can access the island via the game's Creative Mode using the island code 5053-3302-4847.

Created by Fortnite Creative Builder "JXDVN" and Canadian agency Wunderman Thompson, Remembrance Island is a digital memorial to veterans which includes recreations of First World War trenches, D-Day beaches, a Canadian military cemetery and the Vimy Ridge memorial. Unlike the Fortnite game proper, there is no fighting, damage or weaponry on Remembrance Island. Instead, players are encouraged to discover the 30 information plaques on the island and follow a trail of poppies to a memorial cenotaph in the centre of the island.

The Fortnite island is part of the Royal Canadian Legion's efforts to reach younger people as part of their annual Remembrance Day efforts. The Legion also launched My Poppy, a resource to create a commemorative digital poppy to honour veterans.

"It’s our hope that young Canadians will take a few moments to visit this unique environment and learn about the men and women who gave their lives to protect our freedom," said Freeman D. Chute, senior program officer at the Royal Canadian Legion, in a statement. "As time goes on, we have to find new ways to reach young people and tell the story of Canadian veterans. This is a fantastic example of how to do just that."

"It’s such a great cause. Every Canadian gamer should visit Remembrance Island and take a few minutes to pay their respects," added Ari Elkouby, executive creative director of Wunderman Thompson. "It’s been our absolute honour to work with the Legion to create something so new and unique. It’s rewarding on so many levels."

While efforts to reach and teach younger people via Fortnite is commendable, the annual poppy campaign where Canadians are encouraged to wear a red poppy in October and November for a donation remains the Royal Canadian Legion's largest annual fundraising program. All proceeds from the poppy campaign go towards veterans and their families. In 2017 the Legion distributed 19.8 million poppies and disbursed $16 million dollars to those in need between October 2017 and October 2018.