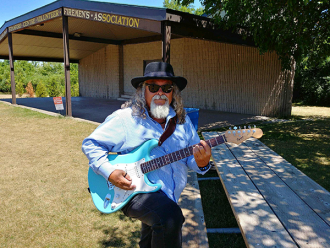 On July 21, event organizers Paul Lemire and John Fillion are hoping that 1000 musicians will show up to Firemen’s Park in Niagara Falls, Ontario and sing five Canadian songs and an AC/DC tune for charity.

If Day of 1000 Musicians all comes together as planned, Lemire is hoping to raise $5000 each for a quartet of charities, including two associated with music, Major Progressions Music Therapy and Music Gives Movement; in addition to Project SHARE  which provides emergency food to families in need in Niagara Falls; and Stamford Centre Volunteer Firemen’s Association.

Major Progressions Music Therapy offers open and closed group therapy and one-on-one sessions that use singing, songwriting, music listening, movement, song discussion, the playing of instruments and improvisation to improve the mental and physical well-being of their clients.

The Music Gives Movement program, presented by the Niagara Conservatory of Music, works with underprivileged children to underwrite their music lessons to those who express an interest and are eligible.

“It is musical event, so it only seems natural that we would give back to the music industry,” Lemire tells Samaritanmag.

The premise for the family day in the park is simple:  250 singers, 250 guitarists, 250 bassists and 250 drummers – all voluntary – will comprise the event, kicking things off with Australian rockers AC/DC’s “Long Way to The Top,” and then performing five Canadian hits: Tom Cochrane’s “Big League,” Chilliwack’s “Fly At Night,” 54.40’s “Nice To Luv You,” Bryan Adams’ “Summer of 69” and Neil Young’s “Rockin’ In The Free World.”

Musicians don’t have to pay to play, and admission is also free for the audience, of which Lemire is hoping 5000 to 7000 people attend and enjoy the day of festivities, also populated by local bands and headlined by Rose Cora Perry and the Truth Untold.

Monies will be raised through sponsors, vendors, donation and a $5 parking fee, with proceeds following what Lemire calls “hard costs” are covered.  People are also asked to bring a non-perishable for Project SHARE.

Lemire says he came up with the idea while sitting in his backyard, noticing a similar event held by Cesena, Italy, which recorded 1000 local musicians playing the song “Learn to Fly” in order to get the Foo Fighters to play in their city back in 2015.

“Their motive was to get the Foo Fighters to appear in their small town, which they did after the video went viral, and I was awed by it because it was so phenomenal,” Lemire recalls. “So, I thought, man, if I could do that in the Falls, that would be fantastic.”

Lemire then reached out to John Fillion, a 35-year veteran of the Sam The Record Man music retail chain and the two started planning.

“That was July,” Lemire recalls. “And we’ve been working towards the date of July 21 ever since.”

There is also no admission to the public for the event, which kicks off at noon.

Lemire hopes that “5000-7000” people will show up to the event and claims that “more than 500” musicians have already registered to join in the festivities.

“Hopefully we’ll expand it to other cities, perhaps Hamilton and London,” says Lemire. “Once we’ve done it once, we’ll have a formula to do it again."