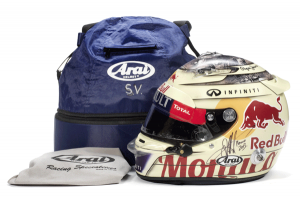 Champion Formula One driver Sebastian Vettel raised almost $133,000 for not-for-profit spinal cord research foundation Wings for Life by auctioning off his racing helmet last year, and another helmet will go on the block to support the same cause at Bonhams Goodwood Festival of Speed sale in Chichester, England on June 27.

The customized helmet — which features an image commemorating driver Sir Stirling Moss' 1961 Monaco Grand Prix victory on the crown and a pin-up model whose clothes become more transparent when the temperature increases on the back — is signed by Vettel and dated Monaco 2013. Vettel finished second in last year’s Monaco Grand Prix on the way to winning his fourth consecutive Formula One championship. He sits in fifth place after seven races this season.

No reserve price has been placed on the helmet, which has an estimated value of between $18,500 and $22,000, ahead of the auction. The Arai helmet was created by Jens Munser Designs and all of the proceeds from its sale will go to Wings for Life, according to the press release issued by Bonhams auction house.

Two-time motocross world champion Heinz Kinigadner and Red Bull founder Dietrich Mateschitz became the driving forces behind Wings for Life after Kinigadner's son Hannes had a tragic accident which left him a tetraplegic in 2003. A tetraplegic is someone who has suffered a spinal cord injury to the neck region and subsequently experiences complete or semi-paralysis below the level of the break.

Vettel drives for Red Bull Racing and at just 26 is already one of the most successful Formula One drivers of all time. He became the circuit’s youngest champion when he clinched the 2010 title. The German had this to say about Wings for Life on its website:

"None of us is ever exempt from the unforeseen. It is my friendship with Heinz Kinigadner and his son Hannes that led me to support Wings for Life. Every time I see them, I am impressed by the way they deal with their situation. I believe in the social importance of Wings for Life and therefore I am proud to be an ambassador.”

Bonhams was founded in 1793 and is one of the world’s largest auctioneers of fine art and antiques. People can register for its auctions here.