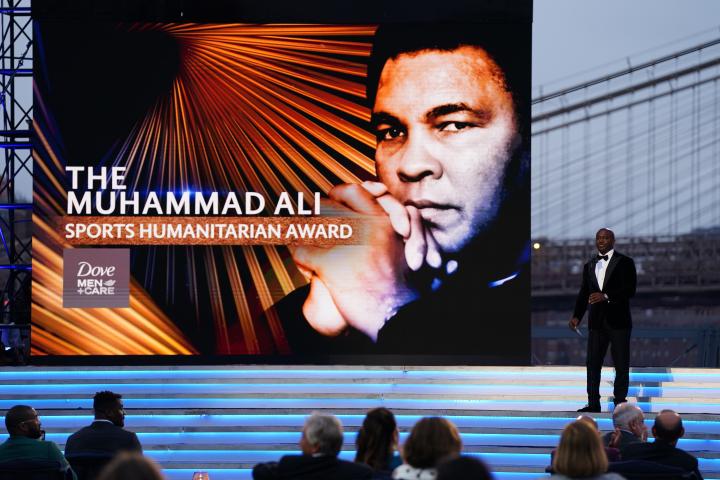 ESPN’s seventh annual Sports Humanitarian Awards were presented on July 12 at New York City’s The Rooftop at Pier 17. The event, hosted by actor and author Taye Diggs, will air as a 90-minute television special on July 24 at 2 p.m. ET on ABC.

The awards and sponsorships benefitted the Stuart Scott Memorial Cancer Research Fund at the V Foundation for Cancer Research, which supports minority scientists and researchers working to improve outcomes for minorities who are disproportionately affected by cancer.

“This past year was unlike any other, and the sports world met the ongoing challenges head on, responding to the vast needs of our communities, while providing hope and inspiration to millions,” said Kevin Martinez, vice-president of ESPN Corporate Citizenship, in a media release.

Montreal's Laurent Duvernay-Tardif was the recipient of the Muhammad Ali Sports Humanitarian Award, which goes to an athlete whose continuous demonstrated leadership and care has created a measured positive impact on the communty through sports.

Duvernay-Tardif was the first National Football League player to opt out of playing in the 2020 season due to COVID-19 in order to work as an orderly for eight months, helping medical professionals and caring for the vulnerable.

Duvernay-Tardif also served on the National Football League Players Association’s COVID-19 task force, where he helped examine different scenarios for the safest measures to put in place when football games returned. He also created the Laurent Duvernay-Tardif Foundation with his girlfriend Florence to ensure both physical activity and creativity are a part of a child’s development and educational success.

As much for his humanitarian efforts as his playing, Duvernay-Tardif was-named the co-winner of the 2020 Lou Marsh Award with soccer player Alphonso Davies. The honour is given annually to Canada's top athlete.

The Atlanta Dream of the Women's National Basketball Association was named Sports Humanitarian Team of the Year, an honour that goes to a team that demonstrates how teamwork can create a measurable impact on a community or cause.

Following George Floyd’s murder and the subsequent protests, the Dream’s previous owner and Georgia Senate candidate denounced the WNBA’s public support of the Black Lives Matter movement, undermining her own players and their beliefs, and forcing them to take a position in direct opposition of their employer.

Dream players wore “Vote Warnock” T-shirts during a nationally televised game, publicly endorsing the owner’s opponent in the Georgia Senate election. The support of the WNBA and the Dream catalyzed the opponent’s candidacy and led to his Senate victory.

In a full circle moment, the team made history again when former Dream player Renee Montgomery became the first former WNBA player to become both an owner and senior executive.

The Dream was named in honour of the Reverend Dr. Martin Luther King Jr.’s iconic “I Have a Dream” speech, and what these women accomplished for civil rights and social justice embodied King’s dream of a more equitable America.

The League Humanitarian Leadership Award went to the National Basketball Association. It recognizes a professional sports league’s programmatic and philanthropic investments and its work in strategically engaging with athletes, teams and business partners to create positive impact in communities.

The NBA Together initiative — launched 10 days after the league’s March 11 shutdown due to COVID-19 — kept fans informed and connected to important resources. It also generated more than $100 million for part-time arena staff, healthcare workers and vital servers, while providing more than 10 million pieces of personal protective equipment and donating nine million meals to food-insecure populations.

The NBA helped expand voting access and awareness ahead of the American presidential election, as 23 teams committed facilities for safe voting and enabled 300,000 people to cast ballots.

The league also created the NBA Foundation with an initial $300-million investment to create greater economic empowerment in the Black community through employment and career advancement. The NBA  built on that commitment during this year’s all-star game with a donation of $3 million in support of historically black colleges and universities.

The other winners of this year’s Sports Humanitarian Awards were: