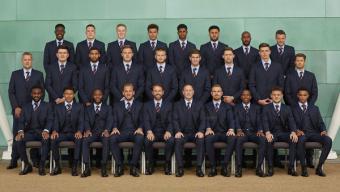 When Kylian Mbappe of the 2018 World Cup-winning French football team announced he was donating all his related match fees to charity it was a gesture met with near-universal approval.

After all, the young star player would be donating an estimated $330,000 USD ($437,780 CAD) towards Premiers de Cordée, a French charity that gets children with disabilities or illnesses involved in sports.

Supporters of the English football team — which finished fourth at this year's World Cup — were quick to point out that the entire team is donating its match fees to charity, something members of the national team have been doing since 2007 under the banner of the England Footballers Foundation (EFF).

English national team players, most of whom are extremely well paid by their club teams in the English Premier League, have taken the position that playing for their country is a privilege, not a money making opportunity. So when a group of players that included Gary Neville, David Beckham and Michael Owen created the EFF they started a tradition that continues to this day.

Neville, who played 85 matches for the English team between 1995 and 2007, highlighted the EFF's work.

"Countless charitable initiatives have benefitted with the lives of thousands of people being positively impacted through their work. I am very proud that today’s England players are continuing this initiative."

Charities the EFF have helped include The Bobby Moore Fund for Cancer Research UK, Unicef, OnSide, Rays of Sunshine, The Honeypot Children’s Charity, WellChild, Together for Short Lives, Cancer Research UK, Help for Heroes, The British Forces Foundation and Help Harry Help Others.

The 23 members of the 2018 English squad earned a £16m ($27.61m CAD) bonus for their performance at the World Cup. That money is split between the players, staff and football federation.