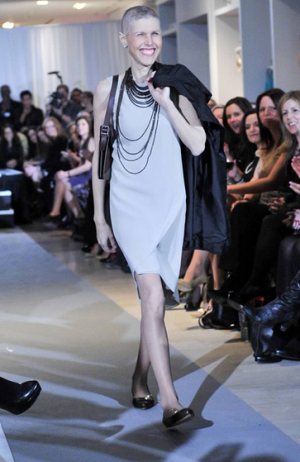 A room offering free treatments to cancer patients will be named after noted editor Linda Lewis at Toronto’s Wellspring Cancer Support’s downtown centre. Lewis, who died last summer at age 52, was the editor-in-chief of More magazine and prior to that Today’s Parent.

The recent Well Dressed for Spring fashion show at Holt Renfrew to benefit Wellspring raised $244,000, which included $28,000 to name the “Energy Room” after Lewis. The plaque is currently getting created.

“The money raised as a tribute to Linda, together with money being raised by Linda’s family and friends, will ensure the Energy Room will be dedicated in Linda’s name for a minimum of five years and beyond,” Wellspring’s director of communications Margaret Valois tells Samaritanmag.

“The Energy Room at the Centre is currently open and fully functional. It is used to provide programming such as Reiki therapy, therapeutic touch and healing touch, which help people living with cancer manage their stress levels, reduce anxiety and pain, regain a sense of control in their lives and to rebuild both physical and psychological strength through the balancing of the body’s energy.”

Lewis had acute myeloid leukemia, which the Globe and Mail reported stemmed from a bone marrow disorder called myelofibrosis and may have developed from the chemotherapy she received at age 39 to treat cervical cancer. She co-founded the Cervical Cancer Research Fund at Toronto’s Princess Margaret Cancer Foundation, headed by Dr. Joan Murphy, and was a vocal advocate for the vaccine to prevent cervical cancer.

Last February Lewis attended the Well Dressed for Spring and participated in the fashion show. “Weighing only 94 pounds and sporting a bald head instead of her signature blonde locks, she proudly walked down the catwalk in her last public appearance,” the Toronto Star wrote in her obituary.

At this year’s event, Elle Canada editor-in-chief Noreen Flanagan paid tribute to Lewis and also announced the corporate donation of $10,000 on behalf of TC Media.

“Most of you who know her would say without a doubt that she was energetic; she was passionate; and you would also say that she had a warmth and a kindness to her manner, which really explains the very deep connection she had with her friends and her coworkers and even the strangers that she would meet at the cancer ward, although they were strangers for only a very short time,” said Flanagan, as part of a lengthy and warm eulogy.

“For 25 years, as a journalist and an editor, she inspired her readers as well as her colleagues at TC Media, not only with her spirited leadership and her drive to excel, but everything she did — the way she handled her health issues with such gracious, tenacious, and at times humorous ways.”

Lewis started a Twitter account, @LindaOnLeukemia, to chronicle her battle, which often demonstrated her humour — which Flanagan quoted examples of — and heartfelt thanks for the support she received from her 1332 followers.

Her last post was June 28, 2013: “This brutal disease may be taking its toll, but I still appreciate all the warm messages. Thanks for the continued support.” She passed away July 22 at her Toronto home.

At the 2014 Well Dressed for Spring, Lewis’ twin sister, Leora, and her daughter Nikki, walked the runway in her memory. While Lewis was not officially registered as a member of Wellspring, she was “a committed and involved volunteer and ambassador,” says Valois. Lewis also co-founded Well Dressed for Spring in 2012.