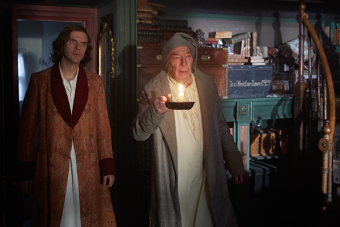 Canadian film distribution company Elevation Pictures held two charitable events this past week in advance of the theatrical release of The Breadwinner, the animated film about a girl who disguises herself as a boy in order to work after father is jailed by the Taliban, and The Man Who Invented Christmas, co-starring Christopher Plummer and Dan Stevens.

The private screenings of The Man Who Invented Christmas — about novelist Charles Dickens’ (Dan Stevens) creation of A Christmas Carol — were for families staying at 11 Ronald McDonald Houses (RMHC) across Canada. The homes away from home are intended to keep families close to the hospital where their sick child is being treated. According to RMHC, 70 percent of Canadian families live outside a city with a children’s hospital.

“When you leave this film, you leave uplifted and that’s what we wanted to bring to the families staying at the Ronald McDonald Houses across Canada. It’s a wonderful charity and we are thrilled to have the chance to team up with this inspiring organization,” said Elevation’s co-president Laurie May in a statement. The film is now in theatres.

Elevation also partnered with global child rights organization UNICEF and Toronto refugee reception service Matthew House to invite refugee families to enjoy an advance screening of The Breadwinner at Cineplex Yonge-Dundas, followed by a welcome dinner at Milestones restaurant. The film is directed by Nora Twomey and executive produced by Angelina Jolie.

“Matthew House is a community of three homes in central Toronto that welcomes and assists newly arrived refugee claimants offering hope at the end of their long journey on the refugee highway,” it states on the website.

The Breadwinner, now in theatres, is based on the best-selling Canadian children’s book by Deborah Ellis, published through Groundworks Books. Ellis spent three months at refugee camps in Pakistan as research for her non-fiction book, 2000’s Women of the Afghani War; one story she heard inspired the children's book, The Breadwinner, whose main character is 11-year-old Parvana.  The sequels are 2002’s Parvana’s Journey and 2003’s Mud City.

According to Canadian Women in Afghanistan, Ellis has donated all of the royalties from the sale of The Breadwinner trilogy to the organization. The author originally donated $3,000 in 2001 from her advance for her first book, saying, “I don’t know how the book will sell but this is a start to help a school in Afghanistan.” It grew to $850,000 with royalties from the first two books and with all three has surpassed $1 million, according to her personal web site. Some media outlets have reported as much as $2 million.

“The royalty funds coming in from Groundwood Books are managed by CW4WAfghan in a special account called Parvana’s Fund. Grants are made from the fund towards education projects for Afghan women and children through the long-standing relationships CW4WAfghan has with Afghan partner organizations with projects aimed at improving the quality and access to education.