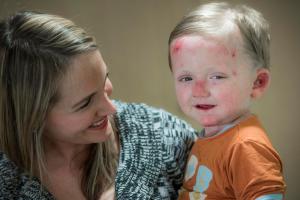 A variety of musicians and actors will join Pearl Jam singer Eddie Vedder and former model wife Jill, the co-founders of the EB Research Partnership (EBRP), for a digital fundraising event called Venture Into Cures on Nov. 18 at 8 p.m. EST.

Epidermolysis bullosa (EB) is a group of rare diseases that cause fragile, blistering skin that may appear in response to minor injuries, even from heat, rubbing, scratching or adhesive tape. The blisters may occur inside the body, such as the lining of the mouth or the stomach, in severe cases.

Most types of EB are inherited and it usually shows up in infancy or early childhood. Children with the most severe forms of the disease are unlikely to live into adulthood, while some people don't develop signs and symptoms until adolescence or early adulthood.

EB has no cure, though mild forms may improve with age. Treatment focuses on caring for blisters and preventing new ones.

The Vedders and fellow parents Ryan and Heather Fullmer founded Heal EB in 2010. It merged with the Jackson Gabriel Research Foundation in 2014 to create EBRP.

EBRP is the largest global non-profit organization that funds research to discover treatments and cures for EB. It has raised U.S.$40 million and funded 80 research projects to date while helping increase the number of EB clinical trials from two to more than 30.

The show will feature the debut of a new song by Vedder that was inspired by stories of people with EB.

Venture Into Cures will be streamed live on the Pearl Jam, Eddie Vedder, EBRP and nugs.tv Facebook pages and YouTube channels, as well as at VentureIntoCures.org and PearlJam.com. All proceeds will go to EBRP.

Donation information can be found here.

People interested can create a Venture Into Cures fundraising team on its GoFundMe page, which had raised U.S.$107,795 by 3 p.m. EST on the day of the event.