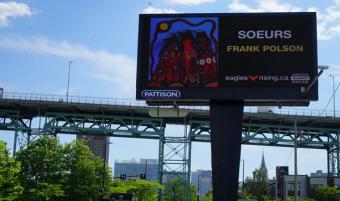 A new billboard campaign from Artists Against Racism is raising awareness about missing and murdered Indigenous women and girls (MMIW) across Canada.

As part of the organization's Eagles Rising efforts 12 billboards were raised across Canada on June 16 to honour the memory of missing and murdered Indigenous women. The billboards contained specially commissioned illustrations from prominent artists with tributes to individual women.

"Sisters is dedicated to the memory of our missing and murdered Indigenous women and girls," said artist contributing artist Frank Polson, whose work 'Sisters' appeared on the Montreal-area billboard. "They were traumatized and stolen and it will continue if we do not commit to action and change. All Indigenous women and girls are sacred. We must break the cycles of violence."

"I am honoured to be a part of this project, and to donate my own art to Artists Against Racism, joining with other First Nations artists in lending our work and our voices to this desperately needed conversation and reconciliation," added Dakota Sioux artist Maxine Noel, in a statement.

A national inquiry by the Canadian government recently determined there was no "reliable estimate of the numbers of missing and murdered Indigenous women, girls, and 2SLGBTQQIA persons in Canada" and compared the both the violence against, and lack of systematic concern for victimized Indigenous women equal to genocide. An interim report released in 2017 found that Indigenous women in Canada were six-times more likely to be murdered than non-Indigenous women. The Native Women's Association of Canada has documented 582 MMIW cases, though some estimates suggest more than 1,000 women have been affected.

The Eagles Rising campaign aims to keep the conversation about MMIW in the news and in peoples' awareness. Other contributors to the campaign include musicians Buffy Sainte-Marie and Tom Wilson. Artists Against Racism, the organization behind Eagles Rising, was launched in 1995 with a goal to create international art-focused campaigns which "create an awareness of the inherent equality of us all."

The billboards appeared at the following locations: