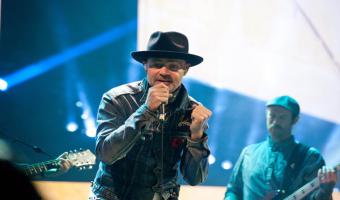 The families of Gord Downie and Chanie Wenjack say they've experienced a "massive outpouring of love and support" since Downie's death from brain cancer on October 17. He was 53.

Downie, the solo musician and lead singer for The Tragically Hip, released his concept album Secret Path in October 2016, six months after he had revealed he had terminal brain cancer. The album tells the story of Chanie Wenjack, a 12-year-old boy who died while running away from the Cecilia Jeffrey Indian Residential School near Kenora, Ontario in 1966.

Gord Downie and his brother Mike Downie also co-founded the Downie Wenjack Fund, which is committed "to improving the lives of First Peoples." Money raised by the fund will be guided by the National Centre for Truth and Reconciliation. Gord Downie also used his final public appearances, including his final concert tour with the Hip to encourage reconciliation with Canada's aboriginal peoples.

"When Gord said at The Tragically Hip’s last concert, ‘We’re going to figure it out. You’re going to figure it out,’ he believed in all of us and he inspired us to take action. He left us knowing we are coming together like never before to make Canada the best place it can be for the next 150 years. Bringing Indigenous people and non-Indigenous people together and getting them to know each other is our responsibility. I truly believe that it's Gord's unfinished work," said Mike Downie in a statement.

Downie was honoured at the 2016 Assembly of First Nations Special Chiefs Assembly in December 2016 for his reconciliation efforts. He was given an eagle feather, swaddled in a star blanket, and anointed the "Man Who Walks Among the Stars."

"I want to thank Gord Downie for his call for action to all Canadians. He compelled you to 'do something.' It is people like Gord that help brings awareness to the history of residential schools to a larger Canadian audience, so that people can become more conscious of the work we all must do to make reconciliation a success in this country," said Morley Googoo, Atlantic Regional Chief, Assembly of First Nations.

"Inuit will always be appreciative of the significant contributions Gord made on the path to reconciliation… Gord’s work for Indigenous peoples in the face of personal adversity will be an enduring and extraordinary example of true courage and dedication to building a better Canada," added Natan Obed, the nation leader for Inuit Tapiriit Kanatami (ITK), the national representative organization for Inuit peoples.

Working towards reconciliation was far from Downie's only cause. The singer created the Gord Downie Fund for Brain Cancer Research, which collected funds "to help beat brain cancers that are currently unbeatable," and was a water protector for Lake Ontario Waterkeeper.