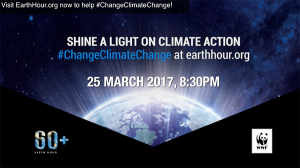 It’s tough getting three people together for dinner. So, the coordinated worldwide movement that is Earth Hour — happening Saturday, March 25 in cities across the globe — illustrates the urgency people feel toward protecting the planet and to "shine a light on climate action."

The movement, which began 10 years ago as a “lights out” event in Sydney, Australia has grown exponentially since then. It’s estimated six continents, over 170 countries, 24 time zones and millions of individuals worldwide will flick the switch tomorrow, according to WWF Canada.

"Donate your Facebook feed and join the global movement to #ChangeClimateChange," it reads on Earth Hour's change climate change web site. "Your support over the past ten years has helped Earth Hour become the world’s largest grassroots movement for the environment. As millions around the world unite for the planet, share what you believe in. Use your social power to spark real change."

And Earth Hour has some very high-profile cheerleaders, among them Charles, Prince of Wales, a long-time environmental protection proponent who speaks in an official video promoting the 2015 event. Ditto Ban Ki-moon, Secretary-General of the United Nations from 2007 to 2016 and who reminds viewers that "No individual action is too small, no collective vision is too big."

As organizers behind Earth Hour note on their website, “Over the years, Earth Hour participants have helped make some pretty amazing things happen. From changing laws to funding solar-powered homes, together we've made a real, positive impact on our planet.”

Those metrics are measurable in three key areas:

Funded projects: “Together, we've funded WWF projects all over the globe, including providing communities with climate-smart boats after typhoon Haiyan and bringing solar power to families in India.”

Advocated for change: “Earth Hour supporters have successfully advocated for more climate-friendly laws and policies, such as those that have banned plastic in the World Heritage site of the Galapagos Islands.”

Changing lives: “We've helped bring real change to the lives of thousands of people around the world such as when we provided families with fuel-efficient stoves in Nepal and Madagascar.”

On Saturday, people in virtually every country in the world can expect to see city landmarks darkened in honour of Earth Hour. Some stats from 2016: 178 countries and territories participated, with over 400 of the world's most iconic landmarks (from Toronto's CN Tower to Paris' Eiffel Tower) switched off, according to the Earth Hour website. Use

Now in its 11th year – and with an individual who denies climate change holding the highest office in the United States – the message of Earth Hour seems more pressing than ever.

*The World Wide Fund for Nature (WWF) is the new name for the former World Wildlife Fund, which remains its official name in Canada and the United States.