Donations Can Be Made in Memory of The Jellyfish Project’s Daniel Kingsbury, Dead at 28 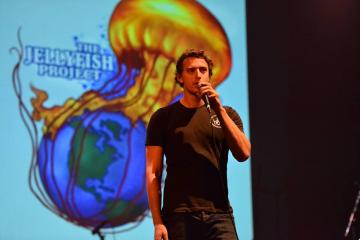 The world's oceans have lost one of their protectors. The Jellyfish Project’s co-founder and former Mindil Beach singer Daniel Kingsbury, a staunch environmental advocate, died earlier this week. In lieu of flowers, the family is asking for donations to The Jellyfish Project and the Music for Youth Endowment, now renamed the Daniel Kingsbury Music for Youth Endowment.

Kingbury was just 28 when he ended his life June 1 near his home in Roberts Creek, British Columbia.

“At this very sad time for many people who loved Daniel Kingsbury and his family, one way to honour them is to contribute to something he was passionate about,” it reads on the Sunshine Coast Community Foundation donation page.  “His music filled us all with pride and joy but even moreso, we respected Daniel’s compassion for others.

“He and the other members of the ‘Waking Life’ group set up the Music For Youth Endowment to assist youth at risk by giving them the opportunity to take music lessons, and to create and record music.  An endowment provides these funds to be available in perpetuity thus we will never forget Daniel’s generosity and his big heart. We have renamed the endowment to the Daniel Kingsbury Music For Youth Endowment.”

A Celebration of Life will be held Saturday, June 6, for Kingsbury, at the Roberts Creek Community Hall.

Started in 2011 and endorsed by the likes of David Suzuki, The Jellyfish Project's key component is a musical educational stage show that Kingsbury participated in with the help of the band Mindil Beach. Their goal was to "educate our audience on our environmental realities, and provide solutions, learning resources and opportunities to engage" by using the plight of the jellyfish to teach students about the state of the world's oceans.

“We learned that jellyfish are a powerful symbol for the fragility and declining health of the world's oceans,” Kingsbury told Samaritanmag in 2013. “Around the world today, jellyfish are showing up in record numbers. This is happening due to a global increase in ocean temperature and acidity, and the overfishing of jellyfish predators."

Kingsbury's dream was for The Jellyfish Project to become a many-armed tool to reach more young people. He left Mindil Beach in early 2014 to devote more time to his environmental work.

"It is my hope that The Jellyfish Project will in the not too distant future have several bands under its umbrella, perhaps two or three bands operating in every province," he said. "There are tons of schools, and MBM certainly can't play and present at all of them. I'm looking at recruiting other bands and that excites me a lot. Then, who knows?  Expand to the States, Australia and so on."

On Mindil Beach's Facebook and Kingsbury's personal page, friends and fans have been sharing stories of him, especially his impact from The Jellyfish Project.

"I am heartbroken over the news of Daniel Kingsbury's passing," wrote Laura Mina. "Daniel invited Carmanah with open arms to join his amazing organization, The Jellyfish Project. We will miss him greatly and always cherish the memory of him, as well as his legacy dedicated to protecting the environment and celebrating music...Rest in Peace Daniel, knowing that you had a profound and positive effect on so many people and that you will always be remembered and missed."

"Still thinking about Daniel Kingsbury and still in shock," wrote Dane R. "He was truly such a gentle soul. He was thoughtful of his friends and the world outside his social circles...He used music to touch those around him and his environmental passion and pursuits especially through The Jellyfish Project were so inspiring and made me even more proud to be associated with him..."

Days before his death Kingsbury had uploaded demo versions of 94 songs to his Soundcloud page. One song, "This Years A Different One My Friend," features lines like, "I wouldn't change a thing/I've no regrets of anything/We'll see what tomorrow brings/Again and again" and "Some might say to live within the day/But I can't find a way to make it seem true/And I'm at ease but I'm trapped in memories of times when we were young and times that are through."

Another song, "When I Die," includes these words: "The ocean is still and daylight's fading...Although I'm young, my days are numbered...When my lights go out, will my memory stand tall? When I die, when the day comes that I'm gone, will I be a free man or a slave? When white light comes, at the gates will they let me in...forgotten like the rest or remembered with the best? I want a mark upon my grave."