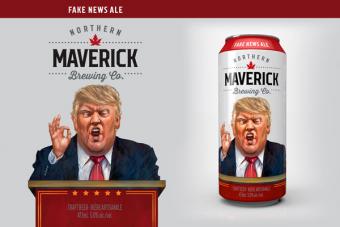 Humour is an antidote to almost anything, so surely humour served with a side of charity is an unstoppable force. Or at least a powerful ploy to gain traction in a crowded marketplace.

That may well be the hope behind Fake News Ale, a new beer by emerging Ontario craft brewer Northern Maverick Brewing Co., which is set to open an 11,000-square-foot, 400-capacity restaurant and retail space in downtown Toronto this summer.

Fake News Ale — its can emblazoned with a sneering image of U.S. President Donald Trump hectoring from a lectern — is cheekily touted as “pairing well with small hands, striking comb overs, huge egos and all things Mexican,” while offering “a respite from the bleak political developments of late, an easy-drinking beer that lends itself to long discussions over world events with friends.”

Perhaps more meaningfully, the beer is the first in what’s promised as a charitable line of beers soon to be available in the flagship Northern Maverick store and through direct delivery in Ontario. According to a press release from Northern Maverick, five percent of every Fake News Ale can sold will be donated to a charity working to reverse a “questionable policy.”

The company estimates those donations will represent 20 to 25 percent of Fake News Ale’s profits, lest you needed additional incentive to drink cold, delicious beer in summertime. Beer drinkers are invited to nominate and vote for which cause will receive the charitable donation on Northern Maverick’s website in the coming weeks.

And which “questionable policy” will earn the dough? Green initiatives might have a leg up given that the Trump administration’s proposed cuts to the Environmental Protection Agency seek to shrink spending by 31 percent (to $5.7 billion from $8.1 billion) while eliminating a quarter of the agency’s 15,000 jobs, according to the New York Times.

And then there’s Trump’s green-lighting of the highly controversial and widely criticized Keystone XL pipeline. But we digress.

The press release adds, “Clearly no American president has endorsed this beer, but the company is offering beer-lovers VIP tour tickets, launch invitations and the opportunity to be the first to get their hands on Fake News Ale by following Northern Maverick on social media @NorthernMaverickBrewing on Instagram and Facebook, and @NorthernMavBeer on Twitter.”