Deane Cameron's Family Selects MusiCounts To Donate To In His Memory 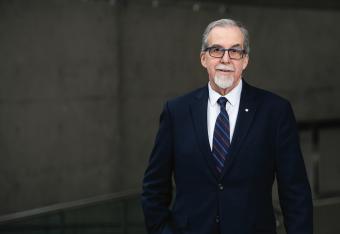 In memory of Deane Cameron, those who would like to honour the music man who mentored so many in the Canadian music industry and signed such artists as Anne Murray, Nickelback, Tom Cochrane, Buffy Sainte-Marie, Stompin’ Tom Connors, Serena Ryder, and The Tea Party, can donate to MusiCounts , “which the family holds close to heart,” it reads on his memorial page.

Cameron was a founder, contributor and donor to MusiCounts and served on the advisory committee for over 20 years

The president and CEO of The Corporation of Massey Hall and Roy Thomson Hall in Toronto since 2015 — who spent the majority of his career at EMI Music Canada where he was president for 24 years — was at his cottage at Eagle Lake in northern Ontario when he suffered a heart attack May 16 while walking in the woods. He was 65.

“Some charities have a web site that you can visit by clicking on the charity logo or name. After making a donation, you can return to this page to notify the Family and Friends by clicking ‘Submit Donation Notification’ and filling out the form,” it reads on Turner & Porter.

In 2010, Cameron was made a Member of the Order of Canada, one of the country’s highest honors awarded to a citizen.

“Deane Cameron has championed Canadian musicians for decades,” his award profile on the Governor General of Canada’s web site reads. “As a persistent and passionate executive in the recording industry, he has been an outspoken advocate for First Nations artists and their music, has opened doors for Canadian artists in national and international markets, and was instrumental in shaping the successful careers of a number of Canadian music stars.

“An active supporter of industry associations, he is highly regarded for his advocacy of anti-piracy initiatives and the revision of copyright laws. He also played a key role in the development of MusiCan, a national program that provides grants to schools for the purchase of musical instruments, scholarships for students, and awards for music teachers.”

MusiCan was later renamed MusiCounts, the music education charity associated with the Juno Awards, both under the Canadian Academy of Recordings Arts & Sciences (CARAS) umbrella.

“MusiCounts’ mission is to ensure that all youth in Canada have access to the transformational power of music education in their school or community, and that's why the charity focuses on improving access to music education for youth by offering instrument grants to schools and communities.”

MusiCounts has added a dedicated donaton page to Cameron, who was also known to some as "Captain Canada." It reads: "He was a trailblazer in the Canadian music industry, dedicated to artist development, and part of the CARAS & MusiCounts family.

"The impact from his legacy will be felt forever. Deane’s contributions to MusiCounts were wide-reaching and invaluable as a founder, contributor and donor. He served on the MusiCounts Advisory Committee for over 20 years and was part of MusiCounts’ journey from the beginning. Following the success of the compilation box set Oh What A Feeling commemorating the 25th anniversary of the JUNO Awards, Deane helped establish the MusiCounts Band Aid Program, which is the cornerstone of MusiCounts to this day. Thanks to Deane’s contributions to MusiCounts, many children across Canada have experienced the incredible benefits of music."

(Updated: as of May 23, 20019, at 9:15 a.m. ET, this story was updated to reflect MusiCounts as the only charity selected by the family. Music Canada Cares has since been removed from Cameron's memorial page.)