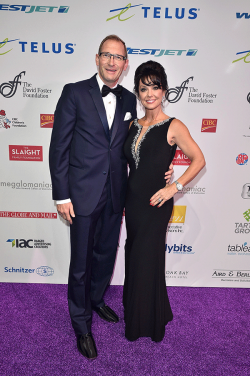 The sum was announced at the annual event, this year held at Toronto’s Mattamy Athletic Centre (formerly Maple Leaf Gardens), attended by more than 900 guests at the floor-level tables and 1900 in the arena seats. Last year, it was held in Calgary.

Foster, whose work as a producer and songwriter has earned him 16 Grammy Awards and inductions into the Canadian and Hollywood walks of fame, started the foundation in 1986 in his hometown of Victoria, British Columbia to raise awareness about the importance of organ donation and to help families with children in need of transplants with their non-medical expenses.  It has since helped close to 1000 families across Canada.

Michael Ravenhill has been working for Foster for more than 25 years, initially volunteering as a director and president on the board. During that time, he expanded the provincial charity to a national foundation.  In 2009, he was appointed chief executive officer.   He spoke to Samaritanmag about the goal.

Why 30 x 30? Why it it necessary to frame it that way? Why not just reach the fundraising goal the way you always reach it?

30 x 30 gave us the ability to set a target. Everyone loves targets and when you can give people targets it helps you get closer to the goal. Without a target, you’re just kind of shooting out there. So our 30th anniversary is 2017 so $30 million by 2017. The 30 actually is because with that we’re able to provide that endowment where the interest on that endowment can help support our families forever.

In Canada, transplants are covered by our healthcare system, but many people have to travel because they don’t live in a city where they perform those operations.

When we look at our foundation and why we do what we do it’s because we’re a national foundation — we help families from coast to coast to coast. Why we do that is because the need is so strong.  When a family is struck with their child needing an organ transplant, what happens right away is that families fracture. One child and mother or father will go to the hospital and wait, while the other parent waits behind and now is trying to keep the wolf away from the door and all the bills paid, but what happens — and a lot of people don’t realize — is there’s twice the expenses now; only one income. Eighty-five perfect of families go into bankruptcy or divorce if we don’t step in.

Is there an average of how much it costs, depending on the wait for an organ or the recovery time?

Have you had anyone in your family or close friends in need of a transplant?

Friends, yes, but not direct family. We do a lot of work with children and families. That’s where our passion is and that’s why I’ve been in the business for 26 years.

And you signed your donor card and told your friends and family that you did?

Yes. That is so important because if you don’t tell your friends and your family what will happen is they can trump when you pass away. You could have five in your family, one person could say no and that will stop [the organ donation].