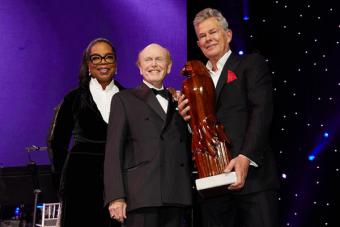 Formed in 1986, Foster's charitable foundation financially supports families for all non-medical expenses while their children are undergoing lifesaving organ transplants.

An Officer of the Order of Canada, 50-time nominee and 16-time Grammy Award winner, Foster has worked with the likes of Michael Jackson, Diana Ross, Celine Dion, Aerosmith, Whitney Houston and Mariah Carey in his career as a hit-making music producer and songwriter.

"This year’s recipients are two Canadian business icons who are committed to the improvement of the lives of Canadians from coast-to-coast," says Michael Ravenhill, CEO of the David Foster Foundation in a statement about the event. "We are incredibly honoured to welcome them to our 30th anniversary celebration, knowing that their long-term support of our Foundation, as well as countless other Canadian charities, has helped to shape the country as a whole."

Past recipients of the David Foster Foundation Visionary Awards have included Jim Treliving, who owns Boston Pizza, former NHL player and child advocate Sheldon Kennedy, and Simon Keith, Chair of the Simon Keith Foundation and one of the longest living heart transplant recipients in the world.