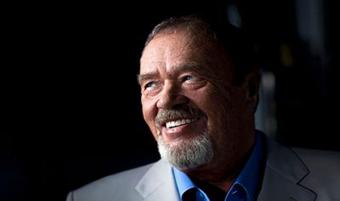 David Clayton-Thomas has released a song confronting the gun violence epidemic in America.

"Given the current climate of gun violence in America, I felt this song should be heard now," said the veteran Canadian singer, in a statement. "This song is dedicated to the kids of Parkland and the March For Our Lives movement."

A mass shooting at Marjory Stoneman Douglas High School in Parkland, Florida on Feb. 14, 2018 left 17 dead, 14 injured. Four days after the shooting at their school, emerging student activists including Cameron Kasky, Emma González and David Hogg announced their intention to hold the anti-gun march under the banner March For Our Lives. Soon after, celebrity endorsements from the likes of George and Amal Clooney and Oprah Winfrey dramatically raised the event's profile, which has since cascaded into an extensive series of events and actions around the world. The latest March For Our Lives initiative is "A Peace Plan For A Safer America," a series of actions to engage governments, affect gun laws and hold the gun-making industry accountable for gun violence.

Written by Clayton-Thomas and Lou Pomanti, the lyrics of "Never Again" dig deep questioning how American and Canada — two countries that are so culturally similar — can have such wildly different levels of gun violence. "If this is a price for your freedom, it comes at a terrible cost," sings Clayton-Thomas about the United States' pro-gun culture. The video for "Never Again" features a chilling series of photos from the March For Our Lives event held in Washington, DC, as well as images of student activists, mourners, media, and those who glorify gun violence.

The 77 year-old Clayton-Thomas has won a Grammy Award and been inducted into the Canadian Music Hall of Fame, Canadian Songwriter’s Hall of Fame and Canada’s Walk of Fame. in his more than 50 year-long career. The singer is planning to release new album Say Somethin' in early 2020.