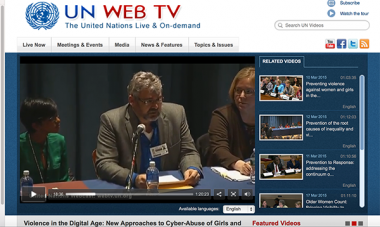 Glen Canning, the father of cyberbullying victim Rehtaeh Parsons, addressed the United Nations earlier this month as part of their Violence in the Digital Age: New Approaches to Cyber-Abuse of Girls and Young Women discussion and panel.

Parsons, who went to Cole Harbour District High School in Cole Harbour, NS, took her own life in April 2013 after a photo of a sexual assault perpetrated on her during a house party was distributed through social media. She was 15 at the time of the assault; 17 at the time of her death.

Two teens have since been punished for the crime. The one who took the photo pleaded guilty to distributing child pornography in November, while the one who posed with Parson in the photo received 12 months of probation. The names of both perpetrators were withheld by the court.

Canning and his ex-wife Leah Parsons have both become outspoken advocates against cyberbullying in the wake of their daughter’s death. Canning, a Halifax-based freelance writer and photographer, started a website that coves a variety of topics, including news on his daughter’s case, sexual assault, violence against women, cyberbullying, suicide, and social media. Both parents’ outspokenness has kept the Parsons case high profile in the wake of a slew of other similar cyberbullying cases.

Parsons posted the text of his speech to his website. It reads in full below (you can also watch it here, starting at 17 min. 45):

“In April of 2013 my daughter, Rehtaeh Anne Parsons, ended her life. She was seventeen years old.

“Her death was directly related to the cyberbullying she suffered following a sexual assault at the hands of four young males. During the assault, a trophy photograph was taken and widely distributed through social media across four Halifax area high schools. The image, along with a story that painted Rehtaeh as a willing participant, was the main reason she would never know peace in her life again.

“Since her death, her mother Leah Parsons and I have been advocating for victims of sexual assault and cybercrime. The last two years have been challenging, not only due to the death of our daughter, but also because of the realization that her case and her experience is far from unique.

“We have heard from numerous women, parents, and teenagers who are suffering from the same type of abuse that led to our daughter’s death. Cyber-abuse, cyber-bullying, and cyber-hate.

“For many women and teenagers suffering from online abuse, reporting incidents can be heartbreaking and the results are far to often – futile.

“It is indeed a new age of communication. The Internet came into being just two decades ago with the promise it would make our world smaller and better. In the last five years, with the advent of social media, doors have been opened into our lives in a way we could never have imagined and for many that has led to terrible consequences.

“Governments have been slow to enact measures to address online abuse and law enforcement agencies either don’t have the laws in place to help, don’t have the resources, or they don’t have the appropriate training. What I hear most often from victims is that they are being treated as if they are part of the crime. Victims are told to stop going on Facebook, or Twitter, or to just stop using the Internet altogether.

“Giving in to predators, trolls, and abusers is not how we will end online abuse. We would never expect a family to keep their children at home if a predator was lurking in the park, or for bullied teenagers to quit school for their own good, or for women to remain indoors as a means to address sexual violence.

“Yet this is exactly what is expected of victims when it comes to online abuse.

“A couple months after my daughter’s death I met a very brave young lady in Halifax. She was 17 years old when she was named one of Canada’s Top Twenty Under Twenty in 2011. She took a Christmas cash gift of $72.12 from her Grandmother and turned it into $16,000 to help a school in Mali.

“This young lady was about to end her life due to the online abuse she suffered only because she was so promising and talented. Her tormentor spread an image around her school that showed him standing in front of a tree that had a photo of her face nailed to it. He was standing next to the tree in the photo holding a rifle and her eyes were shot out.

“The response from authorities in her case reveals very well the systemic failure when it comes to responding to abuse online. No charges, no help, no accountability at all. She was told to just stay off Facebook. Her abuser was told nothing.

“She is alive today only because her mother happened to walk into her bedroom at just the right moment.

“Our history is filled with discovery and invention. It is unforgivable when we turn greatness into weapons and it is just as unforgivable when the unrestricted use of those weapons is met with apathy and indifference. Our children deserve better.

“Almost 300 years ago the Irish political philosopher, Edmund Burke said, “The only thing necessary for the triumph of evil is for good men to do nothing.”

“I am here in memory of my daughter – Rehtaeh Anne Parsons. I am here with the knowledge that we can do better and with the hope that this new and amazing tool of communication will enrich our lives and bring us closer.

“This was [the] promise of the Internet and social media. We will lose that promise only if good people do nothing.”