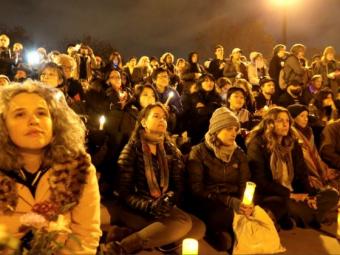 Two YouCaring crowdfunding pages dedicated to raising relief funds for victims of the Oakland warehouse fire have raised $1.3 million U.S. ($1.74M CAD) since the tragedy occurred on Dec. 2 with the targets easily reached and the goals upped.

After attaining its initial goal of $500,000 U.S. in just five days, the fund started by the Gray Area Foundation of the Arts to help pay for either medical bills for survivors or a small memorial service for victims of the tragedy that claimed 36 lives is now aiming for $850,000 ($1.3M CAD) — yesterday it was $750,000 — thanks to the generosity of more than 11,300 donors.

Meanwhile, a separate Oakland Fire Relief Fund started by Major League Baseball's Oakland Athletics is less than $30,000 away from reaching its $550,000 ($735K CAN) goal.  The A's not only kicked $50,000 into the pot, but fellow pro athlete teams — football's Oakland Raiders and basketball's Golden State Warriors — have matched that $50,000 respectively, with a further $75,000 pledged by Sutter Health and the rest of the money covered by 3,536 private individuals.

Also a GoFundMe page started for the 20 residents who were living at the warehouse and lost their belongings raised $29,090, more than their their $25K goal.

"We remain extremely grateful for the tremendous support of our community in the face of the Oakland Fire Tragedy," wrote an unidentified Gray Area Foundation representative on the YouCaring.com site shortly after the fund was started.

"As an organization, we have had to shift our operations to focus fully on fielding inquires, processing contributions, and communicating effectively -- all while grieving ourselves. Our team is giving our time, attention, and resources to serve our community in this time of need.

On the YouCaring.com page, Gray Area explains that it's a non-profit organization working with the Mayor of Oakland's office and the Red Cross, which will serve in an advisory capacity and determine the proper distribution of the funds.

The amount was raised despite some earlier misgivings that some of the funds may wind their way into the hands of Derick Ion Almena, the manager of the warehouse — named the Ghost Ship Arts Collective — where the fire broke out, who was allegedly warned repeatedly about fire hazards and allegedly did nothing about them.

"So is this money going to Derrick (sic)?" asked one responder from Winston-Salem, N.C.

"Can we be assured none of the fundrasing (sic) efforts will be handed to Derick or his wife?" asked another.

"On top of donating money, where can someone donate clothes, toiletries and items needed for the surviors (sic) who have been left with nothing? I can't find a place foro (sic) drop offs. Any info you have would be appreciated!!" asked Kelly Sparks.

Some Youcaring.com crowdfunding sites have been set up to assist the surviving families of identified victims.

The fire broke out at approximately 11:30 p.m. on Friday, Dec. 2 during a party hosted by the electronic music label 100% Silk, with artists Golden Donna, Cherushii and Nackt among the bands scheduled to perform.