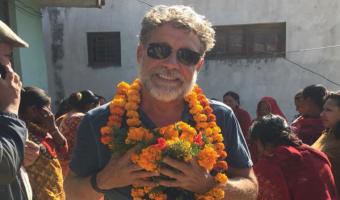 A crowdfunding campaign has been launched to support Gerry Lee, the tour manager for veteran Canadian rocker Tom Cochrane, who suffered a stroke in September, and whose "big heart" has his friends and associates stepping up to help.

The GoFundMe campaign which was launched Dec. 9 has set a goal of $60,000 to help fund Lee's home care, food, rent, a wheelchair and customizations to his residence. In less than two days. the campaign has raised just over $2400.

According to the post on the Lee GoFundMe page, on Sept. 12 he "had a massive stroke and was rushed to the hospital in Toronto where the doctors worked on him to the best of their ability but he suffered brain damage and lost the function of the right side of his body. As of today he’s slowly recovering in a rehabilitation center. He still doesn’t have function in his right arm and leg but can now slowly speak and has just been able to eat solid food."

The fundraising effort was set up by Bill Bell, a producer, musician and long-time guitarist for Cochrane.

"If you’ve ever met him then you know what a big heart he has," Bell wrote. "He hasn’t complained once and continues to be upbeat but I can only imagine the stress he feels as he may not be able to work for the next few years and as we know in the music community, that means zero financial income.  Gerry would give you the shirt off his back, always make you feel like you’re welcome and I’m hoping we can do the same for him. It would be a Christmas miracle if we could raise funds for him and alleviate some of the stress that he must be feeling."

Cochrane, who recently tweeted out the fundraiser, spoke out about Lee in September, saying, "My good buddy and road manager had a severe stroke last week it’s been a rough 7 days for him we’re all wishing him a speedy recovery, you got this Ger! send out good vibes all."