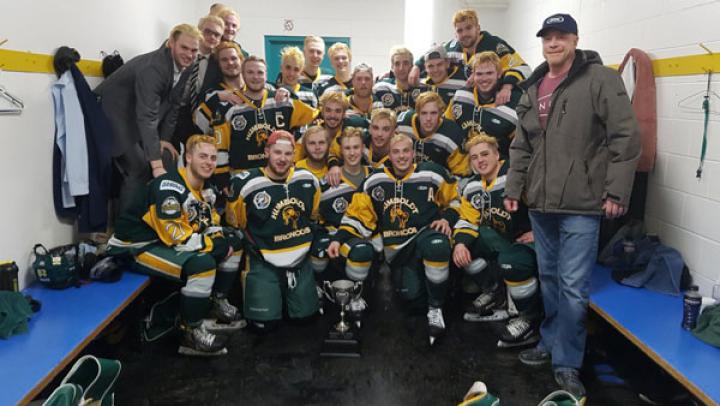 A fund set up for the victims of the Humboldt Broncos junior hockey team's bus crash has rapidly raised close to $5 million. The Royal Canadian Mounted Police (RCMP) have now confirmed there were 15 fatalities and 14 injuries among those on the Broncos' bus that collided with a semi-trailer truck on April 6.

The response of support for the victims and their families has been overwhelming in recent days. A Gofundme page set up by Sylvie Kellington, a resident of Humboldt, Saskatchewan, who has "a son that played for the Broncos Bantam A team just this past season," has raised $4,855,534 in the last two days, dramatically surpassing its goal to raise $4 million.

"Money will go directly to families to help with any expenses incurred," Kellington writes on the page. "Myself and the staff of GoFundMe is now in direct contact with the vice president of the Humboldt Broncos, and plans are underway to move money raised. I'll continue to update you all here as this progresses."

In an update yesterday Kellington said, "Almost 60,000 people from almost 60 countries around the world have heard our story and were moved to help."

In another gesture of solidarity, hockey families throughout North America have be responding to the #PutYourStickOut hashtag by leaving their hockey sticks outside the front doors of their homes. The stick tribute was propelled by TSN broadcaster Brian Munz and a friend he went to high school with who was from Humboldt.

The Broncos play in the Saskatchewan Junior Hockey League, which features players aged 16 to 21 who are often good enough to move on to higher level collegiate hockey or the minor professional level.

News of the accident has hit the hockey world hard.

Long bus rides are a right of passage for almost all high-level hockey teams from youth on upwards, so there's huge community of people who understand the true magnitude of this loss. This same community has been rallying around the surviving players and staff, family and friends, and those in the community of the population 5,896 prairie town of Humboldt.

Numerous teams and players around the National Hockey League made supportive Broncos gestures during games in the last two days, including the Calgary Flames and Edmonton Oilers, who brought gifts to the crash survivors and the Winnipeg Jets and Chicago Blackhawks, who replaced the nameplates on their jerseys with "Broncos" for their game April 7.

Tonight we play for the name on our back.

Additionally, athletes in other sports have been paying tribute to the Broncos as well, with Major League Baseball players including the likes of Toronto Blue Jays pitcher Marcus Stroman also providing touching tributes.

In another gesture of solidarity, hockey families throughout North America have be responding to the #PutYourStickOut hashtag by leaving their hockey sticks outside the front doors of their homes. The stick tribute was propelled by TSN broadcaster Brian Munz and a friend he went to high school with who was from Humboldt.

Got this text from a friend who I went to high school with in Humboldt.

Inviting you to do the same as we remember and send our thoughts to the #HumboldtBroncos.#PrayersForHumboldt #Broncostrong #Humboldtstrong #theSJHL #TSNHockey pic.twitter.com/HHwZyUZ5KG