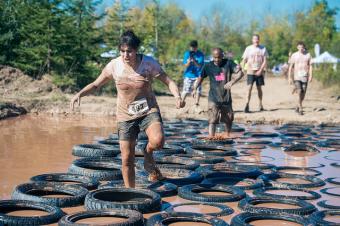 A dirty initiative from the MS Society of Canada is taking an irreverent approach to fundraising. Called Muck MS Canada, the four upcoming events will see participants go over, under and through 15 obstacles in a 5 kilometre mud run, all in the name of fighting multiple sclerosis. Run dates are Aug. 8 in Estrie, Quebec; Aug. 29 in Quebec City, Sept.26 in Hamilton, ON; and Oct. 3 in Chilliwack, BC. Some 7,000 participants are expected, according to organizers.

A description of the Chilliwack run, for example, at Dicklands Farms, along the banks of the Vedder River and in close proximity to the Rotary Trail, says “The 5K course will feature more mud this year, which equals more fun and less run! There will be fun new obstacles and returning favourites that will have you jumping, crawling, sliding and climbing such as mud beams, trenches, the culvert crawl and so much more.”

All proceeds from the registrations fees go to the MS Society of Canada, which, according to its web site, was founded in 1948 and is “the only national voluntary organization in Canada that provides both services to people affected by MS as well as funds research to find the cause and cure for this disease.”

Multiple sclerosis is a disease of the central nervous system that interferes with communication between the brain and the body. Canada is the country estimated to have the highest instance of MS sufferers in its population, with some 100,000 afflicted. On average three new cases are diagnosed in this country daily, with women three times more likely to contract MS than men.

“The first Muck MS Canada event was held in Quebec City in 2013, with a more complete event series roll-out to four locations in 2014,” Lindsay Gulin, media relations specialist at the MS Society of Canada in Toronto, tells Samaritanmag. “2015 will be the second year for the four-event Muck MS Canada series.”

Advance online registration for individuals and teams is available now, although runners can also register on site the day of an event if space is available. Fees for registration vary depending on the site and rise closer to event days. All proceeds go to support MS Canada’s mission to fund MS research, as well as provide programs and support to those suffering from MS.

Fundraising is not required but can be done via the Muck MS Canada website. “Donations from your friends, family and co-workers will go a long way in the fight to end MS,” reads a statement on the site’s FAQ page.

Participants are encouraged to wear clothing they do not mind getting dirty and to avoid wearing jewelry or items they don’t want getting lost in the mud. Closed-toe shoes are also recommended. Expect to need between one and a half and two hours to complete the course.

Washing stations will be available on site. Perhaps not surprisingly, there are no rain dates. “[I]n fact, the rain might make things a lot more interesting!” reads another statement.

There is no spectator fee but donations are welcome and appreciated. Volunteers to set up courses and cheer on participants during and after their efforts are also welcomed.