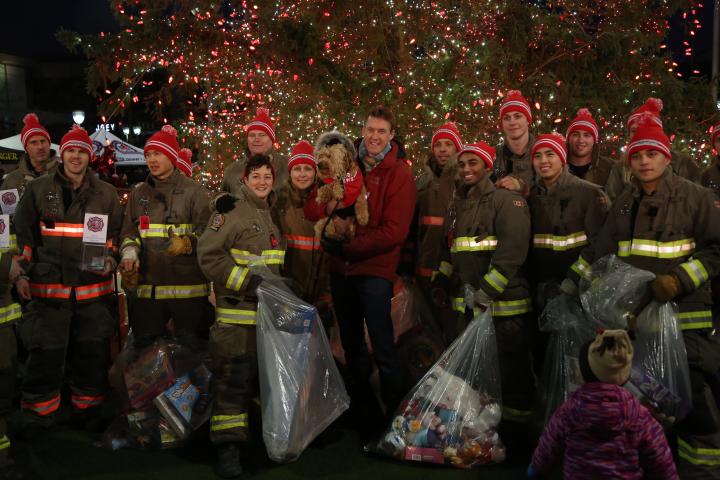 Television and radio stations owned by Corus Entertainment Inc. are holding and supporting events to benefit charities for the holiday season across the country, in cities including Vancouver, Guelph, Winnipeg, Toronto, Calgary and Edmonton.

Global News and 640 Toronto have partnered with the Toronto Fire Fighters Toy Drive and primary sponsor Spin Master for the 15th consecutive year to bring the spirit of the season to families across the city. People can make monetary donations here or donate new and unwrapped toys to a local fire station in the Toronto area.

The campaign raised nearly $106,000 in 2020 and this year proceeds will also be used to purchase necessities, including underwear, socks and other basic hygiene items. The toy drive has also partnered with Kits for a Cause, which offers holiday gift kit and winter warmth kit donations of pre-packaged items.

Vancouver radio station CFOX will hold its own 50/50 draw as part of the Santa Fox Food Drive, a campaign that has run for more than 30 years. Funds raised from ticket sales will support SHARE Family & Community Services, a non-profit, independent, community-based organization that exists to connect, engage and strengthen individuals and families by providing leadership and programs in response to the social needs of local residents. The winner will be announced on Dec. 17 at 7 a.m. on The Jeff O’Neil Show.

Global News Winnipeg and radio stations 680 CJOB, Power 97 and Peggy @ 99.1 supported Siloam Mission, a Christian humanitarian organization with a mission to alleviate hardships and provide opportunities for change for those affected by poverty and homelessness, for the sixth year with Fill the Freightliner.

The initiative helped to fill a Freightliner truck with winter clothing, non-perishable food, toiletries and other items to support community members in need. People could drop off items at a local Boston Pizza restaurant to help fill the truck or make a monetary donation from home on Dec. 4.

Global Calgary is presenting the Month of Giving, which evolved from the television station’s traditional Morning of Giving, until Dec. 22. The focus is on mental health and food security by supporting Parachutes for Pets, Kerby Centre, the YMCA Calgary Y Mind program and the Calgary Food Bank.

Calgary radio station 770 CHQR annually dedicates a day to local kids and charities to create positive change in the community. Dec. 3 was Pledge Day, a 12-hour radiothon held in partnership with The Westin Calgary, where listeners learned about the work of Calgary Children’s Foundation on behalf of those who may otherwise fall through the cracks. Donations can still be made here.

The money raised is used to help provide breakfast or lunch to hungry kids, or bring children together with their peers. Support is also provided to kids with physical and/or mental challenges.

The 18th annual Global News Give Me Shelter campaign runs until Dec. 19 in support of six Edmonton area women’s shelters. It involves collecting gift cards and monetary donations to better support women and children fleeing domestic violence by making sure they have the items they need, and more, when they arrive at the shelters.

A gift card donation box has been set up at the station and online monetary donations can be made here. Global Edmonton on-air personalities will host a donation drive-through drop-off from 7:30 a.m. to 11:30 p.m. on Dec. 15 at the station.

Edmonton radio station 630 CHED hosted a 12-hour radiothon on Dec. 1 to raise money for the station’s Santas Anonymous campaign. The station is celebrating 66 years of delivering toys to less fortunate children in Edmonton.

Each child receives a gift package that includes, at minimum, a book, a plush animal, a primary and a secondary toy. The primary toy is one that a child can instantly use while the secondary one is a seasonal outdoor toy or something that requires someone else to play with, like a board game.

Radio station Magic 106 in Guelph, Ont. ran a 12-hour broadcast on Nov. 22 that invited listeners to “adopt” a family for the holidays in support of the Children’s Foundation of Guelph and Wellington’s Adopt-A-Family program.

Adopt-A-Family matches Guelph and Wellington County families in need with community donors who provide them with gifts and grocery cards for the Christmas season.

Magic 106 listeners could adopt a family for $350, which would cover bills it might have, buy gifts for kids, purchase a holiday meal or be used for other appropriate reasons. More than 150 families were adopted this year to raise a record total of $59,550.