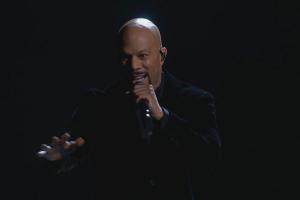 Consciously-minded rapper Common used his appearance at the 90th Academy Awards last night (March 4) to call out U.S. President Donald Trump as well as the National Rifle Association (NRA).
Common used a spoken word intro before his performance of "Stand Up For Something" with Andra Day to address Trump's "hate." In one short sequence, he signaled his support for the young people of Parkland, Florida fighting for gun control reform, supported Haitians and Puerto Ricans still reeling from natural disasters, and called back to Michelle Obama's quote "when they go low we go high."

"Tell the NRA they in God's way and tell the people of Parkland we say àse (a West African concept about creating change). Sentiments of love for the people from Africa, Haiti, to Puerto Rico," he said, before adding, "These days we dance between love and hate. ... A President that trolls with hate. He don't control our fate because God is great. When they go low we stay in our heights. I stand for peace, love and women's rights."

"Stand Up For Something," which was introduced by David Chappelle, was from the movie Marshall, which was nominated in the best original song category. It was co-written by Common and Diane Warren. Marshall stars Black Panther's Chadwick Boseman as the titular Thurgood Marshall, the first African-American Supreme Court Justice.

"I’m inspired by the work you all do and it was an honor to be in your presence," tweeted Common after the Oscars.

Common and Day's performance was far from the only social justice-related statements throughout the evening. Host Jimmy Kimmel's opening speech touched on a number of issues, Kumail Nanjiani and Lupita Nyong demonstrably supported DACA "dreamers" and the trio of Ashley Judd, Annabella Sciorra and Salma Hayek Pinault spoke on post-Harvey Weinstein sexual harassment in the entertainment industry.