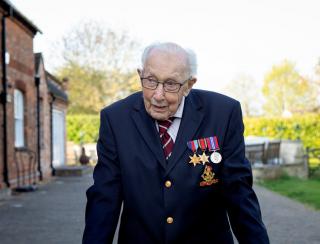 Tom Moore officially ended his walk to raise money for the United Kingdom’s NHS Charities Together, but donations continue to pour in.

The 99-year-old British army veteran, who has become known as “Captain Tom” since gaining celebrity status over the past few weeks, set a goal for himself on April 6 to walk 100 lengths of his 25-metre back garden in Marston Moretaine, Bedfordshire before he turned 100 on April 30.

Moore’s original intention was to try and raise £1,000 (C$1,748) through a JustGiving page for the charity in support of National Health Service (NHS) staff members and volunteers battling the COVID-19 pandemic. That figure was reached by April 10. New targets were quickly added and surpassed as Moore’s efforts gained media attention.

Though Moore uses a walker, he turned out to be more spry than he originally thought and he achieved his 2.5-kilometre goal by April 16. Moore has since continued to walk to serve as an inspiration and get some healthy exercise while aiming to reach another 100 laps.

Moore’s efforts have resulted in him raising the largest-ever amount for a JustGiving campaign, beating the previous record of £5.23 million (C$9.14 million) raised by teenage activist and charity blogger Stephen Sutton for Teenage Cancer Trust. He battled cancer until passing away from the disease in 2014 and being posthumously appointed to the Most Excellent Order of the British Empire by Queen Elizabeth.

Funds raised by Moore are being spent on such things as well-being packs, sleeping pods, and rest and recuperation rooms for NHS staff members and volunteers. The money is also paying for electronic tablets that enable hospital patients to keep in contact with family members and friends, as well as for providing mental health support for staff and volunteers involved in dealing with the pandemic.

Moore further showed his willingness to give in an April 22 Twitter message on a page with tweets written on his behalf.

"I have very kindly been offered lots of lovely items, such as walkers, chairs and other items,” he said. “I have everything I need, so instead of giving to me, perhaps you could donate these generous offers to a local care home. Thank you.”

Moore was a trained civil engineer before enlisting in the army when Britain entered the Second World War. He served in India, Burma and Indonesia before returning home at the end of the war and becoming an instructor at the Armoured Fighting Vehicle School. Moore went on to work for a concrete manufacturing company.

Moore married his wife Pamela in 1968. She passed away in 2006. He has two daughters and has lived with one of them, Hannah, along with her husband and two of his grandchildren since 2008. Moore received treatment from the NHS for skin cancer and a broken hip in recent years.

While that’s not the resume of your typical celebrity, Moore has become somewhat of a phenomenon through his fundraising efforts.

More than half-a-million people have signed a petition for Moore to be knighted, and a local public bus has been named in his honour.

Singer Michael Ball recorded a digital single version of Richard Rodgers and Oscar Hammerstein II’s “You’ll Never Walk Alone” with the NHS Voices of Care Choir and Moore that went straight to number one on the U.K.’s The Official Big Top 40 chart after selling almost 36,000 copies in its first 48 hours of release.

Moore has received messages of support from well-known athletes and entertainers, including golfer Justin Rose and 103-year-old singer Vera Lynn, as well as everyday people who aren’t much known outside of their circle of friends and family members.

Artists, animators and craftspeople have paid tribute to Moore through advertising billboards, garage murals, paintings, patchwork collages, knitted dolls, balloon figurines and videos. There was even a version of David Bowie’s “Space Oddity” recorded with new lyrics dedicated to Moore.