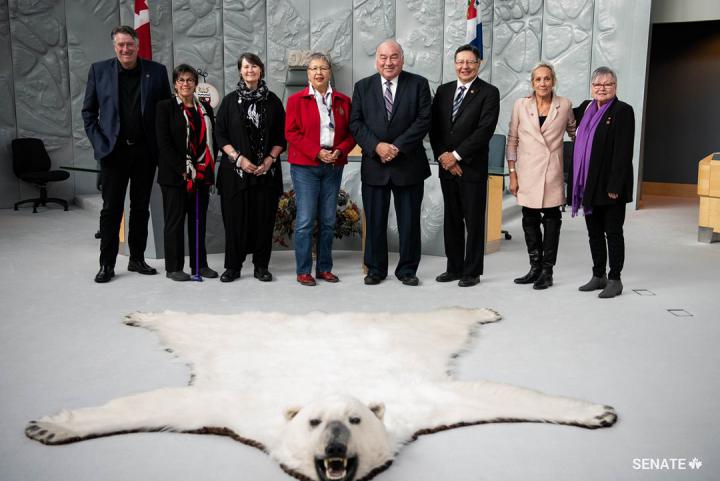 A group of Canadian Senators recently travelled to communities in the western Arctic to meet with representatives of a broad cross section of Indigenous peoples and communities, to learn first hand the vision that these communities have for themselves as well as for their relationship with the rest of Canada moving forward.

Meetings were held in Yellowknife, Deline and Inuvik in the Northwest Territories, as well as in Old Crow and Whitehorse in the Yukon. The senators were members of the Senate Standing Committee on Aboriginal People’s chaired by Sen. Lillian Eva Dyck. Other senators on the trip included Kim Pate, Mary Jane McCallum, Scott Tannas, Marilou McPhedran, Sandra Lovelace Nicholas and Dan Christmas.

In Yellowknife, according to a posting on the Senate of Canada website, senators heard from representatives of small Indigenous communities, regional Indigenous organizations and political leaders, who talked about issues of self-governance, co-ordination with different levels of government and management of natural resources, as well as access and the quality of education available in some Indigenous communities.

In Deline, a remote community n Great Bear Lake, senators heard from officials concerns about a seeming lack of interest and follow through from the federal government after the signing of a self-government agreement in 2015.

“I think after the signing and the celebratory round dance, everyone on Canada’s side went away,” said Sen. Tannas to community leaders, admitting there is a need to get the process moving. 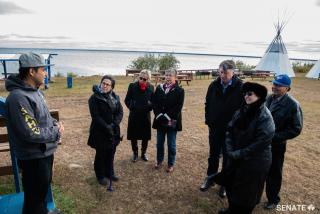 As well, in Deline the committee members also heard about concerns from local officials over the changes that are already happening to their traditional lands because of climate change, limiting the use of ice roads.

In Inuvik, senators were told that they and most residents of the southern portions of Canada need to dispel their preconceived notions about ‘the north’ and that it is a vibrant, diverse, and innovative region that has limitless potential for development and prosperity which would benefit both Indigenous and non-Indigenous people in the territories. They also heard about one of the regions for the success and economic growth within Inuvik is because of the collaborative relationship between all stakeholders and all community members.

“It’s complicated, but it seems to work,” said Sen. Tannas, who is also the deputy chairperson of the committee.

Elder Roger Kyikavikchik spent time talking with senators about the rich traditions in the community of Old Crow, but also of the challenges that continue to belabour residents, including economic instability, the impacts of climate change, and food insecurity.

At Yukon College in Whitehorse, on the last day of the senatorial fact-finding exercise, committee members met with students, staff and alumni about the challenges facing Indigenous students, but also to hear of the commitment current and former students have to take their education and knowledge back home to their smaller and more remote communities to help them grow stronger and more self-sufficient.

As well, First Nations leaders in Whitehorse talked about funding issues and bureaucratic red tape hampering their ability to improve their communities. The committee’s press release on the trip pointed out that this was a common struggle testified to everywhere they went.

After the trip, Sen. Dyck said the committee will draw up a report and a series of recommendations on what they see as a way to help forge a new relationship between Indigenous peoples and Canada.

“The report we write on this will not just sit on a shelf,” she is quoted as saying. “We will bring the voices of these communities back to Ottawa, and we will apply pressure on the government to act on their words.”

The Canadian Senate, much like the House of Commons, has a broad range of committees that investigate and report on a number of areas of concern or interest to Parliament and the Canadian people. The Senate Standing Committee on Aboriginal Peoples is one of those and is comprised of members representing all parties and independent Senators.

The committee was formed in 1990 after a motion was presented by Aboriginal Senator Len Marchand from British Columbia, who became the first chairperson of the committee. It marked the first time that the Senate had a committee directly focused on issues relation to Canada’s First Nations.

“Ove the last few years, the committee received mandates to examine and report on the federal government’s constitutional, treaty, political and legal responsibilities to First Nations, Inuit and Metis peoples, and on other matters generally relating to Aboriginal Peoples of Canada,” explained the committee’s web page.

Some recent studies and reports have been on the issues of recognitional of the Metis identity, First Nations education, First Nations governance, implementation of land claims agreements and economic development within First Nations communities.

The Senate of Canada was formed at Confederation in 1867 as an ‘upper house’ for Canada’s Parliament, similar to the House of Lords in the U.K. Prime Minster John A. MacDonald called it a body for sober second thought” and a check on what he believed to be the excesses of the popularly elected house of Commons.  In practical terms the House of Commons is the predominant chamber. All legislation passed by the House must also be passed by the Senate and it is the rare instance that this does not happen. The Senate cannot introduce its own legislation.

The senate was also meant to provide regional representation, which continues to this day as there is more or less equality within the regions of Canada. There are 24 senators representing Western Canada, 24 for Ontario, 24 for the Maritime provinces, 24 for Quebec, with six representing Newfoundland (which joined Canada in 1949) and one senator each for Nunavut, Northwest Territories and Yukon, for 105 senators in all.

From 1867 to this day, senators are appointed by the Governor General but at the advice of the prime minister. Effectively, it became a repository of patronage appointments, as most senators came from the sitting Prime Minister’s own party, although this has changed significantly in more recent years. Generally speaking, senators are most often former cabinet ministers, provincial officials and other eminent people who have distinguished themselves in some form of public service. Originally senators were appointed for life, but now they retire at age 75.

Watch the video of their visit: