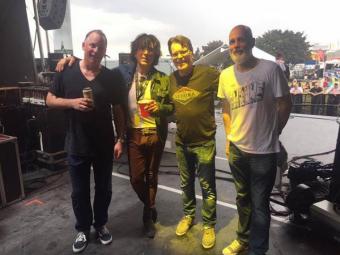 Taking place at Lee's Palace in Toronto, Ont. on March 7, the show has been titled "Be Tracy's Ally" for reasons very close to the band.

The Tracy in question is Tracy Sheridan, owner of Sheridan Skin Studio, and partner to Brad Hopkins, Chalk Circle's bass player. Sheridan lives with metastatic breast cancer and the concert will celebrate her 50th birthday. Proceeds from the event will go towards Rethink Breast Cancer's MBC Ally Fund.

Started in 2001, Rethink Breast Cancer is focused on providing support, awareness and education to young women under 40 impacted by breast cancer. Some of Rethink's efforts include advocating for better health services related to breast cancer, supporting better testing methods and faster service for those who have a high risk of developing breast cancer.

"Fifty years is a milestone for anyone, but for someone living with metastatic breast cancer it is particularly important," said Chalk Circle lead singer Chris Tait in an email to Samaritanmag. "We want to support Tracy and Brad and to raise awareness for Rethink Breast Cancer’s MBC Ally Fund. In keeping with the theme of the evening 'Be Tracy’s Ally' we have lots of surprise guest performers joining us. Very humbling to have colleagues drop what they are doing and offer to perform! I love my community!"

Formed in Newcastle, Ont. in 1982, Chalk Circle's music was prominently featured in the early years of MuchMusic, Canada's music video station. Singles "April Fool," "Me, Myself and I," "This Mourning" and their cover of T.Rex's "20th Century Boy" were all hits for the band. After recording two albums and an EP, the band broke up in 1990, though they've reunited a number of times for special shows in the 2000s. Original members Tait, Hopkins and drummer Derrick Murphy will be joined by Blue Peter's Jason Sniderman for the Be Tracy's Ally show.

The members of Chalk Circle haven't been shy about supporting worthwhile causes in recent years. Tait was instrumental in organizing the Spirit Of John concerts to honour Spirit Of The West's singer John Mann and support the Alzheimer's Society.