Camila Cabello's Birthday Wish to Fans: Support Syria Through Save the Children 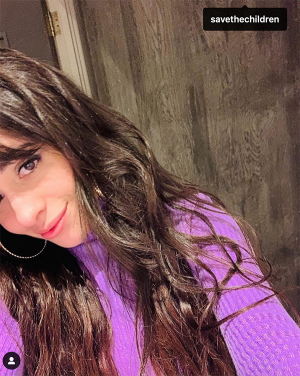 Camila Cabello celebrated her 23rd birthday in style on March 3 in London, but earlier in the day the Cuban-American singer/songwriter took to Instagram to ask that her fans support Save the Children and its humanitarian work with refugees from Syria's nine-year civil war.

"...for my birthday I wanna bring attention to one of the worst humanitarian crises happening in the world right now, in Syria. 950,000 people have been forced to flee their homes because of the violence in Idlib -- some with only the clothes on their back. Most of them are children. Now they're living in displacement camps in freezing cold temperatures," Cabella said in her Instagram appeal.

"Save the Children is working to provide displaced families with food, blankets and warmth," she added. "They are trying to keep kids families safe, but they need our help. so for my birthday, it would mean the world to me if you would consider supporting Save the Children’s response to this humanitarian crisis. Go to savethechildren.org to help Save the Children reach children in need. I love u."

Save the Children in an emergency alert on its website, prompted in part by an escalation of tensions between Turkey and Russia in northern Syria in late February, also talked about a "brutally cold winter" facing fleeing refugees in northwestern Syria, before making an appeal for funds to provide food, blankets and other emergency relief.

"The conflict in Syria has devastated the lives of a generation of young people. Many of Syria’s children have missed years of their education, with 2.1 million children in Syria currently out of school. Prolonged exposure to war, stress and uncertainty has left many childen in a state of 'toxic stress' -- the most dangerous form of stress a child can experience," the non-profit says on its website.

"After nearly nine years of war, it’s more important than ever that we show the children of Syria they are not forgotten. For the 6.2 million people currently internally displaced in Syria and the 5.6 million Syrian refugees with no place to call home, we must continue fighting for a future we all share," the website continues.

With practical support, Save the Children has been sponsoring vulnerable children in Syria and in surrounding hosting countries for Syrian refugees, including supporting families with children.

The charity traditionally offers on-the-ground emergency relief to help children recover from war zones and other global conflicts, while also conducting health, including preventing premature deaths of mothers and babies, education and still other programs to protect children from abuse, neglect, exploitation and violence --and all taking place in around 120 countries worldwide.

Save the Children's traditional sponsorship program allows donors to help one child at a time, whether that child is a refugee or just needing a healthy or safe start in life in other parts of the world.

The immediate appeal by Cabello and Save the Children was prompted by a rocket attack on Feb. 25 that left at least one girl and nine other civilians dead after the shelling of ten schools in Idlib.

"Some schools were in class, some had broken up for the day, and some were being used as shelters," Save the Children said in a press release.

Sonia Khush, Save the Children’s Syria response director added in a statement: "Schools must be safe havens for children, even in a conflict zone. Today’s attacks are another sign that fighting in North West Syria has reached catastrophic levels of violence against children and civilians which go far beyond what is acceptable in conflict. Vast numbers of families have been forced from their homes many times in search of some semblance of safety and stability. And still they face daily and nightly terror as bombs rain down. Nowhere is safe, not even school."

The resumed focus on refugee camps in Idlib follows yet another rise in military tensions between Russian-backed Syrian forces and Turkey. Russia considers Idlib a rebel stronghold in that war-torn country.

Northwestern Syria has also served as a launching ground for Syrian refugees to leave for Europe by land or by sea.

Cabello added on her Instagram page appeal: "Save the Children is working to provide displaced families with food, blankets and warmth. They are trying to keep kids families safe, but they need our help. so for my birthday, it would mean the world to me if you would consider supporting Save the Children’s response to this humanitarian crisis. Go to savethechildren.org to help Save the Children reach children in need. I love u."