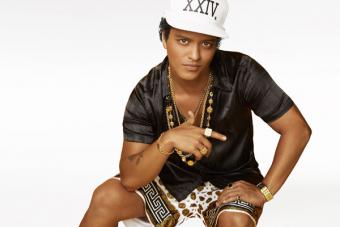 Bruno Mars is going to help five aspiring musicians get a head start in the music industry.The "That's What I Like" singer has just committed to providing financial assistance in the form of a scholarship to one person per year for the next five years to attend the Grammy Camp, a music industry camp for high school age students.

"It’s a privilege for me to be able to help students reach their musical dreams. I’m grateful to Grammy Camp for making this possible," said Mars in a statement.

Started in 2003 and administered by the Grammy Museum, the Grammy Camp takes up to 75 students to take part in their five-day training sessions. The camp offers training in eight specific music industry areas, including Audio Engineering, Electronic Music Production, Music Business, Music Journalism, Instrumental Performance, Vocal Performance, Video Production and Songwriting. Cost to attend the camp is traditionally $1,500 USD ($1,881 CAD). There'll be two Grammy Camps in 2018, one hosted at Belmont University in Nashville and one at the University of Southern California Thornton School of Music in Los Angeles.

"Grammy Camp is one of the surest paths for high school students to acquire knowledge and gain experience about the range of careers available in the music industry," said Neil Portnow, president/CEO of the Recording Academy and Grammy Museum chair. "For the participants, the program offers access to artists and industry professionals who provide mentoring, critical insights, and advice. Bruno truly understands the importance of these interactions for young people who are interested in a life in music, and his generosity and longtime support are heartfelt and genuinely appreciated by the Recording Academy and the Grammy Museum."

Mars, who has won five Grammy awards and received 21 nominations throughout the years, has worked with Grammy Camp in the past. Since 2014, the Hawai’i Community Foundation, which Mars set up on behalf of his late mother, has been sending one Hawaiian student per year to the camp. With Mars' new commitment, needs-based students from across the U.S. will now be eligible for the scholarship to attend the camp.

To be eligible, U.S. high school applicants must complete an online application, video audition, and a financial assistance form. Deadline to apply to attend the next round of camps is March 31, 2018.