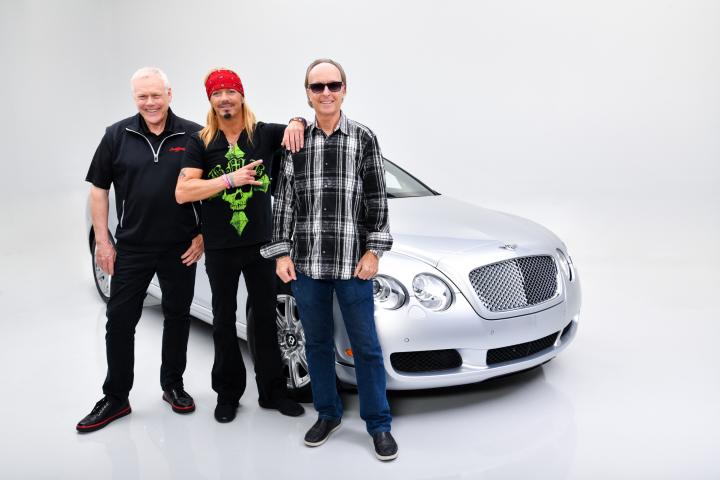 Michaels will put his moonbeam silver-coloured 2007 Bentley Continental GT automobile up for bids at a Jan. 28 Barrett-Jackson collector car auction in Scottsdale, Az. and donate a portion of the proceeds to Life Rocks. The car has been featured in numerous reality shows, music videos and magazines.

“Bret first sold a car at Barrett-Jackson during our 40th anniversary in Scottsdale, creating a level of energy in the arena that only a legend like Bret could and then returned to our 45th anniversary with an incredible concert and once again with vehicles that included a charitable element,” Barrett-Jackson chairman and chief executive officer Craig Jackson said in a media release.

“As we look forward to celebrating 50 years this January, we’re honored that he has chosen to be a part of it through selling his 2007 Bentley GT, a vehicle in which we both share a love for.”

“This Bentley has been one of my favorite vehicles and I look forward to seeing it cross the auction block for a great cause,” Michaels said in the release. “Like Craig says, it is like driving your most comfortable chair surrounded by 552 horsepower; and as I have always said, a good drive is great for the soul.”

Michaels has always been a car and motorcycle enthusiast. He’s raced go-karts and motocross bikes and worked working in the pit with his Poison NASCAR team.

The winning bidder for the Bentley will also receive a one-of-a-kind, Michaels-signed “Every Rose Has Its Thorn” guitar.

Bret Michaels Life Rocks Foundation is a donor-advised fund that benefits a variety of charitable causes, including childhood cancer, diabetes, veterans’ organizations, pet charities and others.

Michaels and the Life Rocks Foundation have sent many diabetic kids to camps to help them learn how to manage their diabetes and show them that there are other kids just like them over the last several years. Michaels is a life-long diabetic who has served as a role model and inspiration for fans of his music, acting and television appearances who also suffer from diabetes.

Michaels comes from a military family and has supported causes such as Wounded Warrior Project, Operation Homefront and United Service Organizations for events as part of how he’s honoured military members and their families over the years.

Childhood cancer has touched Michaels through the stories of children he’s met in his travels, and he’s donated time and money to help them and their families and to raise awareness for all cancer patients and their loved ones.

Michaels is also an animal lover who has raised awareness and support for rescues, pet adoptions and other animal-related charities.