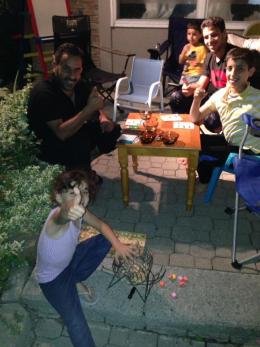 Blue Rodeo’s Jim Cuddy, newcomer Scott Helman, and Damhnait Doyle-fronted band the Heartbroken have all signed on to perform a backyard charity concert this Saturday, Sept. 24, in north Toronto to raise funds for a Syrian family, sponsored by members of the music industry and their friends and neighbours.

Called S'Cool House Rocks, monies raised from ticket sales and a silent auction go to the Al Mokdad Family Education Fund.  Tickets ($150, inc. food and drinks) are still available for the intimate show for 150 to 200 people.

“A large number of individuals answered Debbie Rix's call to action over a year ago to assist a refugee family from Syria to immigrate the Canada,” Al Mair, a record exec who founded the legendary Attic Records, tells Samaritanmag.

Rix is an author and shop owner who is married to Warner Music Canada president Steve Kane. She is also a former music industry publicist.  Also involved in the sponsorship collective known as Project Toronto Welcomes is publicist Victoria Lord, Entertainment One’s Aideen O'Brien and Warner Chappell Music Canada’s Vivian Barclay. All in, about 50 people helped raised money to bring the family to Toronto and help them get set up in their new home.

Project Toronto Welcomes rented a house for them in January, but the familly didn't arrive in Canada until August.

“The family had been living in Jordan for almost three years, waiting for a travel date,” says Mair.  “Zack, the father, ran a successful restaurant in Syria that was destroyed, as was the family home.  The family is composed of Zack, his wife and two young children, as well as his mother, sister and her two sons.

“We collectively raised sufficient funds to support them for one year.  We are now raising funds to provide for their [four kids’] education.  As the children range from kindergarten to grade 12, there are obviously substantial long-term financial needs. We have no target amount.”

Kane arranged for the talent for the fundraising concert, held at a private home, and there may be other events in the future.