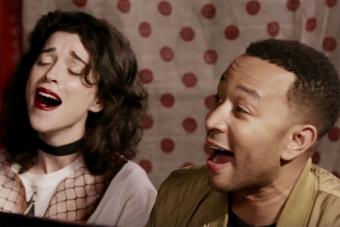 Björk, Mary J. Blige and Margaret Atwood are just a few of the contributors to a massive just-announced seven-inch record series being curated by The Creative Independent to support Planned Parenthood.

The Creative Independent, "a growing resource of emotional and practical guidance for creative people," will be releasing the "7 Inches For Planned Parenthood" series as batches of digital singles and in its entirety as a vinyl box set. Not just music singles, the series will also include contributions from authors, poets, comedians and other artists.

Planned Parenthood is a U.S.-based non-profit organization that provides contraception, family planning, reproductive advice and, occasionally, abortion services. On January 24, U.S. President Donald Trump signed an executive order to end federal funding to the organization. This decision has proven unpopular with anyone who supports women's right, women's health issues and any number of other related issues.

A statement on The Creative Independent's Facebook page explains the organization's reasons for putting this project together:

"Lawmakers with extreme views are working hard to shut down Planned Parenthood. If they succeed, millions of Americans will lose access to basic health services, including STD testing and treatment, birth control, and life-saving cancer screenings.

"7-inches for Planned Parenthood is a response to this threat. This curated series of 7-inch vinyl records is being made by a group of people who believe that access to health care is a public good that should be fiercely protected. Do we know there’s a joke in the name? We do. We hope the title evokes the rich history of 7-inch vinyl records as a medium for protest music and resistance.

"Planned Parenthood will receive 100% of the proceeds from the sale of this 7-inch box set and streaming listens. We see this initiative as the start of something bigger, and hope it will inspire both contributors and listeners to continue to seek out ways to stand with Planned Parenthood and other institutions that are so vital to us all."

The organization says more information on single releases and box set pre-orders will be available in the coming weeks. Meanwhile, to tease the project a video featuring John Legend, St. Vincent and Zach Galifianakas covering Minnie Riperton's 1975 hit "Lovin' You" has been released.