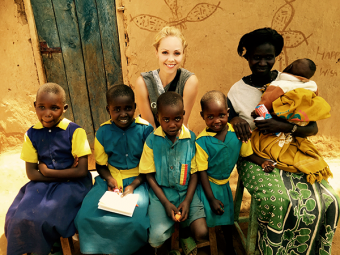 Canadian actress Laura Vandervoort, who spent several years on TV shows Smallville and Instant Star, and now stars in werewolf drama Bitten, has long been involved with charity work. She has participated in ad campaigns for People for the Ethical Treatment of Animals (PETA), donated to North York General Hospital’s neo-natal unit (where she was born), and, most recently, spent 10 days in Kenya with World Vision's Starting Strong.

Starting Strong is a program which provides pregnant and nursing mothers with proper sanitation and nutrition.

“I feel connected to Starting Strong because a) I am a woman, and I was sick as a child,” Vandervoort tells Samaritanmag from her home in Los Angeles.

At one-month old, she had meningitis and says, “I was able to get this amazing medical care in Canada and I was taken care of. These children don’t really have that option. It can start from the day of their birth; they can be in trouble and be sick. I wanted to be involved and try to understand what we can do to help.”

World Vision is a Christian relief, development and advocacy organization dedicated to working with children, families and communities to overcome poverty and injustice.

According to information provided by Vandervoort’s publicist, the Starting Strong program’s mandate is to keep women healthy and strong through their pregnancy and to encourage proper nutrition for their children, especially in their first two years of life, to prevent stunted development.

World Vision estimates that globally 178 million children younger than age five are chronically undernourished, with another 18 million severely wasted. That lack of nutrition impacts their strength as adults, as well as their ability to learn and find work. It also increases their chances of raising children who face the same challenges.

“Some of the women tend to only breastfeed for a short period of time because they’re tired or they can’t make the milk,” Vandervoort says of mothers at risk. “They have four other children, and they end up feeding the children food that ruins their internal organs and end ups causing stunting, which is irreversible after two.”

To that end, World Vision helps build hospitals and medical centres in African communities at risk. They also encourage local governments to spend money on the ground to help their most vulnerable citizens. Hygiene is also an important lesson taught to new mothers.

“It was shocking to me. A lot of these women didn’t know about washing hands,” Vandervoort says. “I expected they might have a lack of knowledge of certain things. But washing hands, that’s such a simple thing that I didn’t expect they would be unaware of it. It starts from a very minor level like that up to how to prepare food and getting their birthing charts, tracking and monitoring their [children’s] height and weight and all of that.”

Vandervoort started working with World Vision a decade ago, through their child sponsorship programs.

“Originally, when I decided to sponsor, I was younger and acting and had a bit of money finally at a young age and felt the need to do more than just be a selfish actor. And I was 20, and I don’t know if I saw a commercial or it was something I was already aware of, but I decided I wanted to sponsor one child. And I looked into it and decided to sponsor a girl, Rita, in India. And then a year later, I decided I wanted to do this again, and sponsored another girl [named Boipelo] in Africa. It really doesn’t take much and it makes such a difference.”

Vandervoort says that the World Vision trip came at a point in her personal life when there have been a lot of difficult changes.

“I just wanted to take this amazing opportunity to go and appreciate what I have and try to help and understand” more about World Vision’s operations.

Vandervoort approached World Vision Canada about helping. Initially they offered to make her an ambassador for the organization; she declined.

“I thought, ‘I don’t deserve that title. I don’t want to be an ambassador when I haven’t done anything. I’d like to be more involved.’ And they said, ‘Maybe you could come to Africa with us.’ And I said, ‘Done.’”

To prepare for the February 2015 trip, which saw Vandervoort talk to women in the villages and observe their conditions, she went over hundreds of pages of information and statistics to understand the communities she was going into. Those communities included Nairobi, the district of Marakwet, and various small and isolated Kenyan villages.

“One of the villages we went to was a three-hour drive and a 40-minute hike and we were on the top of a mountain. So very remote villages that do need the medical help.”

Vandervoort is also an animal advocate, having participated in two PETA ad campaigns, one protesting the killing of reptiles for their skin in the manufacture of handbags and the other an anti-captivity campaign aimed at raising awareness of orcas captured and confined for entertainment purposes. 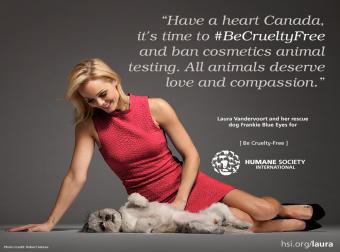 Most recently she teamed up with Humane Society International and Animal Alliance Canada for their online #BeCrueltyFree initiative. She appears in an ad with her rescue puppy Frankie Blue Eyes which encourages the Canadian government to ban the testing of cosmetics on animals. So far 800,000 Canadians have signed the online #BeCrueltyFree Canada petition, according to HIS.

“If we stopped buying products that were tested on animals then those companies would realize that the only way those products would sell is to stop and to ban this,” she says. “It’s just such a silly thing; there are options out there. I would just ask that people be aware of these labels and research. There are options.”

While Vandervoort does her best to only use cruelty-free cosmetics in her personal life, professionally she says she has to walk a “fine line” between wanting to stay true to her principles by insisting upon their use on her sets and getting along with her co-workers.

“It’s difficult because you don’t want to come across as a demanding person,” she says. “But I think if I sort of explain the situation and explain the cruelty that happens and how the animals are treated, most of the makeup artists are very understanding. It’s a slow process, again, but I just try to implement it when possible in my own life. And, in the [Humane Society] shoot, all the products were cruelty-free.”

Vandervoort is passionate about her causes but does not want to come off as self-righteous.

“I know people don’t always like when an actor stands up for a cause,” she says. “And everyone’s entitled to their own opinion, but I just ask that they actually try to understand. And I’m entitled to my opinion as well, and this is something that I believe in, and I’m happy to talk about it.”