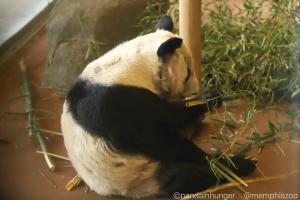 Singer/songwriter Billie Eilish has joined with international animal protection non-profit organization In Defense of Animals and Panda Voices to call for the immediate retirement of giant pandas YaYa and LeLe from Memphis Zoo.

The two animals were shipped to the Tennessee-based zoo from Beijing, China in 2003 and a media release issued by the organizations that have set up a petition calling for the pandas’ release said:

LeLe is 23 while YaYa is 21 and has suffered four miscarriages after invasive artificial insemination procedures. A video about their condition and environment can be viewed below.

“Anyone can see these pandas are in crisis and in urgent need of rescue,” In Defense of Animals communications director Fleur Dawes said in the release. “These pandas deserve to have suitable food and medical care, and retire to a life that resembles the wild as closely as possible.”

In Defense of Animals set up an alert on its website regarding the two pandas and is asking people to sign it and send messages to Memphis Zoo director and chief executive officer Jim Dean and other officials to campaign for their release.

Eilish, a vegan, has previously used her influence to raise awareness about animal cruelty and suffering, defend animal rights, ban fur in the fashion industry, and encourage her followers to consider a plant-based diet. Now she’s encouraging her followers to support the campaign to save the Memphis Zoo pandas by Tweeting about their plight.

“We are delighted that Billie Eilish is joining our fight,” Panda Voices representative Vera Yevseeva said in the release. “Memphis Zoo may keep blocking us on social media, posting updates with old videos and photos, and denying all the problems, but the situation of their pandas is so appalling that people are starting to question their attitude and realize the serious issues animals face in their enclosures.

“No other ‘healthy’ captive pandas worldwide are so visibly stressed and malnourished. They are in extremely poor condition, and urgent measures are needed.

“The support of Billie also shows that the concern with both pandas has increased significantly in the recent months, not only inside the USA, but also in other countries. Returning both pandas to China right away is the responsible thing to do for the pandas' health, and as compensation for the almost two decades of their lives they spent imprisoned in the zoo.”

Panda Voices was created in early 2021 by an international group of people from Asia, Europe and the Americas who were brought together by concerns over pandas to promote the humane treatment of animals in captivity through advocacy and services.

In Defense of Animals is an international animal protection organization based in California that has more than 250,000 supporters and a 38-year history of fighting for animals, people and the environment through education and campaigns as well as rescue facilities in India, South Korea and Mississippi.