Internationally known art provocateur Banksy's "crap" satirical theme park Dismaland is now officially closed, but parts of the park may experience a second life helping refugees in France. The dismantling of the park may result in shelters for refugees there.

Dismaland "bemusement park," a mock theme park in the southwest United Kingdom resort town Weston-super-Mare was actually a social commentary/modern art exhibit featuring 58 separate artists from around the world, devised and curated by the mysterious artist whose work is worth in the tens of thousands of dollars. His identity has remained a mystery to the world at large.

The dismal theme park was opened Aug. 21 this year and closed Sept. 27. On Dismaland's last days a message was posted on its official website saying, "Coming soon… Dismaland Calais. All the timber and fixtures from Dismaland are being sent to the 'jungle' refugee camp near Calais to build shelters. No online tickets will be available."

That message, along with all other info about the park — ticketing, site map, artists, shop, etc. — has now disappeared along with any other accompanying details and has been replaced by the image of a cardboard sculpture representation of Dismaland. 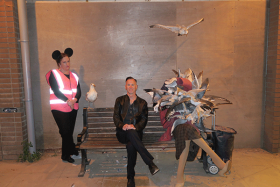 The "Calais jungle" is a nickname that's been given to a series of displaced persons camps around Calais, France. Estimated at a population of 1,500 to 3,000 people, many of those in the jungle are refugees and asylum seekers from countries such as Eritrea, Syria, Afghanistan and Iraq. Although officials in Calais have said they've received no requests from Banksy or his affiliates to facilitate the build of these shelters, informing them wouldn't exactly be his style anyway. When the building of Dismaland took place local citizens were told it was actual a set build for a Hollywood film called Grey Fox.

Not known is if any of the particularly incisive art from Dismaland will make its way to France. "The Shove," a giant crumpling billboard featuring David Cameron holding a glass of champagne, was recently auctioned off for £5,402 ($10,806 CAD). Other exhibits at Dismaland included a sort-of tribute to Princess Diana where a Disney-style princess lies dead in an overturned stagecoach surrounded by paparazzi and one featuring remote controlled boats filled with migrants who drift aimlessly in pools of water.

The dismantling of Dismaland is expected to take three weeks. Check out some of the materials that could end up helping thousands of refugees in this video promo: