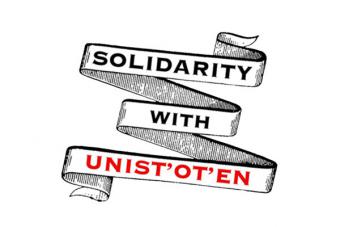 Arcade Fire, Arkells, Dan Mangan, Peaches, Tagaq and Torquil Campbell (Stars) are among the more than 160 high-profile Canadian musicians who've signed a statement of support for the Wet’suwet’en land defenders in their opposition of a Costal GasLink natural gas pipeline project.

Costal GasLink is hoping to construct their pipeline through unceded Wet’suwet’en First Nations territory in the British Columbia central interior. Elected officials from some related First Nations bands have signed away their support for the project while five Wet'suwet'en hereditary chiefs say the project has no authority without their consent — which they haven't given. Supporters of the hereditary chiefs had created blockades to stop pipeline workers, which the RCMP aggressively dismantled on Jan. 7 using tactical response teams resulting in the arrests of 14 Wet’suwet’en land defenders. In the statement the musicians call out the Royal Canadian Mounted Police (RCMP) for their "militarized" actions and for elected Canadian officials for poor action on climate change.

"We watched, infuriated as a militarized RCMP forced the removal of 14 land protectors from Wet’suwet’en territory at gunpoint," read the statement. "The continued invasion of unceded Wet’suwet’en land by Coastal GasLink pipeline workers without your consent violates Section 35 of the Canadian Constitution, the United Nations Declaration of the Rights of Indigenous People and ‘Anuc niwh’it’en (Wet’suwet’en Law)."

The statement also focused on Canadian Prime Minister Justin Trudeau for his work on Aboriginal issues. Trudeau was challenged by late Tragically Hip singer Gord Downie during his final tour in 2016 to do better at reconciliation with Indigenous people in Canada.

"As musicians, we know a PR campaign when we see one: since 2015 Justin Trudeau has promoted a message of Truth and Reconciliation and professed the goal of building meaningful nation-to-nation relationships, but his government’s actions don’t align. Meaningful nation-to-nation relationships are not made at gunpoint,” reads the statement which also includes Joel Plaskett, Tanya Tagaq, Efrim Manuel from Godspeed You! Black Emperor and members of U.S. Girls and Pup among its signatories.

The closing paragraph of the musicians' statement addresses the future impact of climate change and how supporting any sort of pipeline project runs counter to good environmental stewardship.

"This statement is being written 3 months after the UN’s Intergovernmental Panel on Climate Change warned us that there are only 12 years left for us to take decisive action in order to keep global warming to a maximum of 1.5C. This will require the halt of fossil fuel development and a quick transition to clean energy. Those in power who care for the future of life on this planet have no business building more pipelines. We realize that by protecting your yintah, by living on your land, you are not only fulfilling your inherent rights and sacred duties, but you are protecting the plants, animals, and the watershed for all of us. Your hereditary government is showing more leadership in climate action than Canadian elected officials. For that strength and commitment we are grateful."

Right now a temporary truce is in place allowing the gas company access to project lands for the rest of the month in exchange for some anti-pipeline camps remaining intact.