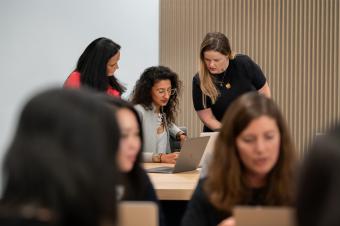 Apple has unveiled a new program, Entrepreneur Camp, to boost and broaden the number of women app developers and computer programmers in the technology industry. Besides helping more women crack the tech industry's glass ceiling, the company is backing women-led digital startups that the tech giant insists deliver a better return for investors.

The tech bootcamp, to be held every three months at Apple's Cupertino, California headquarters, promises a two-week immersive program to tutor women who founded or run an app development company. It aims to encourage opportunities for women in a tech industry with too few role models for female entrepreneurs.

"Apple is committed to helping more women assume leadership roles across the tech sector and beyond,” said Tim Cook, Apple’s CEO, in a statement.

“We’re proud to help cultivate female leadership in the app development community with the new Apple Entrepreneur Camp, and we’re inspired both by the incredible work that’s already happening, and what’s sure to come," Cook added.

Back on the corporate side, Apple broke down the challenges facing female entrepreneurs when it comes to chasing funding, training and support from venture capitalists that provide key early-stage financing for app development.

The tech giant said, however, that women-led digital startups offered a 35 percent higher return on investment than tech startups started or led by men.

Women that lead tech startups also earn bigger paychecks and more prestige across an industry where leadership teams are overwhelmingly white and male.

“This is a program that matters,” said Gina Bianchini, investor and founder and CEO of Mighty Networks, in a statement.  “The new Entrepreneur Camp says Apple wants to invest its expertise in a different, richer, more diverse range of app developers and product experts in a meaningful way, and that is a big deal for the industry.”

And as smaller tech companies give a lift to women entrepreneurs, Apple is hoping more of them go on to lead bigger companies with billion-dollar valuations.

To be eligible for the tech camp, app development businesses must be female-founded, co-founded or led and have at least one woman involved in development. The company must also have a working app or prototype, and want to leverage Apple technologies to bring their product to market.

The program’s pilot session, to include 10 app development companies, is set for January 2019 and applications are now being accepted here.

Entrepreneur Camp will conduct sessions every three months, and eventually include 20 app companies each round after the pilot session.