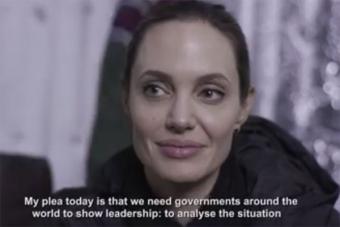 Prominent actor, filmmaker and philanthropist Angelina Jolie has spent the last two days making high-profile appearances in Lebanon and Greece with one strong message: the world needs to do more to support humanitarian refugees.

Jolie, who was appointed as Special Envoy of the UN High Commissioner for Refugees in 2012, used her tour stop in Bekaa Valley, Lebanon on March 15 to make a speech lauding the Lebanese people for their actions in taking in Syrian refugees in recent years as well as calling on governments of the world to use smart, reasoned measures to eliminate refugee crises.

The full text of Jolie's speech can be found below:

"Good morning, I am pleased to be back in Lebanon today.

"I want to thank the Lebanese people for helping to save the lives of over one million Syrians. It is not easy for a country to take in the equivalent of a quarter of its own population in refugees.

"But for as much as it is a responsibility, I hope you are aware of the message it sends about the values and character and spirit of the Lebanese people.

"You are setting an example to the world of generosity, humanity, resilience and solidarity. On behalf of UNHCR, and on my own behalf, shukran, thank you.

"We should never forget that for all the focus on the refugee situation in Europe at this time, the greatest pressure is still being felt in the Middle East and North Africa, as it has for each of the last five years.

"There are 4.8 million Syrian refugees in this region, and 6.5 million people displaced inside Syria. On this day, the fifth anniversary of the Syria conflict, that is where I had hoped I would be: in Syria, helping UNHCR with returns, and watching families I have come to know be able to go home.

"It is tragic and shameful that we seem to be so far from that point.

"Every Syrian refugee I have spoken to on this visit, without exception, talked of their desire to return home when the war is over and it is safe for them to do so – not with resignation, but with the light in their eyes of people dreaming of being reunited with the country that they love.

"I have seen on this visit just how desperate the struggle to survive now is for these families. After five years of exile, any savings they had, have been exhausted. Many who started out living in apartments now cluster in abandoned shopping centers, or informal tented settlements, sinking deeper into debt.

"The number of refugees in Lebanon living below the minimum threshold for survival– unable to afford the food and shelter they need to stay alive – has doubled in the last two years, in a country where 79 percent of all Syrian refugees are women and children.

"We have to understand the fundamental realities that are driving the global refugee crisis – which is the product not just of the Syria war, but of decades of open-ended conflicts or persecution: in Myanmar, Mali, the Central African Republic, the DRC, Nigeria, Somalia, South Sudan, Afghanistan, Yemen, Iraq, Syria. I could go on.

"The number of refugees is now higher than the last time we had a World War. We are at an exceptionally difficult moment internationally, when the consequences of the refugee crisis seem to be outstripping our will and capacity and even our courage to respond to it.

"In conventional times of war, people who are displaced go to more stable areas, or to neighboring countries for sanctuary, or are provided for in refugee camps until it is safe to go home. In exceptional circumstances some are sent abroad for resettlement or asylum.

"But with 60 million people displaced, as there are today, there is no way that the governments of the world– no matter how rich or willing they are – can prop up the UN enough to care for all these people permanently and expect that to address the problem.

"We cannot manage the world through aid relief in the place of diplomacy and political solutions. We cannot discuss this as if it were a problem confined to the situation of tens of thousands of refugees in Europe. We cannot improve this reality by partial responses, by responding to some crises and not others, or by helping some refugees and not others – for instance, by excluding Afghan refugees, among other groups – or by making a distinction between refugees on grounds of religion. The result would be more chaos, more injustice and insecurity, and ultimately more conflict, and more refugees.

"We have to focus on the absolute root causes, and that takes a certain amount of courage and leadership. And in my view, leadership in this situation is about doing more than simply protecting your borders or simply putting forward more aid, it means taking decisions to ensure we are not heading towards an even greater refugee crisis in the future.

"That is why, as heartbreaking and angering it is to hear the individual stories of the refugees, it is not a time for emotion. It is a time for reason and calm and foresight.

"I want to be clear that I understand that people in many different countries have fears about the refugee situation.

"They are worried about the impact on their communities, livelihoods and security if they accept refugees into their countries. It is not wrong to feel unsettled face by a crisis of such complexity and such magnitude. But we must not let fears get the better of us.

"We must not let fear stand in the way of an effective response that is in our long-term interests.

"My plea today is that we need governments around the world to show leadership: to analyze the situation and understand exactly what their country can do, how many refugees they can assist and how, in which particular communities and to what timeframe; to explain this to their citizens and address fears – based not on emotion but on a measured assessment of what can and must be done to share the responsibility and get on top of this situation.

"That starts with having a very robust asylum procedure to be able to hear the needs of the desperate families to identify who is most vulnerable and who has a genuine refugee claim – processes that UNHCR has been supporting governments to carry out for decades.

"I appeal to all governments to uphold the UN Convention on Refugees and basic human rights law, because it is both necessary and possible to protect people fleeing persecution and death and protect citizens at home. It should not be reduced to a choice between one or the other.

"The reason we have laws and binding international agreements is precisely because of the temptation to deviate from them in times of pressure. We know from recent history that when we depart from fundamental laws and principles we only create worse problems for the future.

"I spent time this morning with a mother who was paralyzed after being shot by a sniper's rifle in a besieged area of Syria. She lies in one room, where she lives with her whole family, in a small, cold, makeshift settlement here in the Bekaa Valley. Never once during our discussion did she ask for anything, did she stop smiling, or talk of anything other than her desire for her children to have the chance to go to school and have a better life.

"When I saw her beautiful smile, and her dedicated husband and children looking after her, I was in awe of them. They are heroes to me. And I ask myself, what have we come to when such survivors are made to feel like beggars?

"We can do the right thing by refugees and build a more secure international environment. We can build order out of chaos.

"In my view it comes down to understanding the law, choosing not to be afraid, and showing political will. For the sake of the people of Syria, and for all the refugees around the world looking desperately to the international community to provide solutions, I hope we will do this.

"And I also hope that the 15th of March next year will finally herald a Syria at peace, and will be the beginning of a time of returns so that these refugees are able to fulfill their desire to go home."