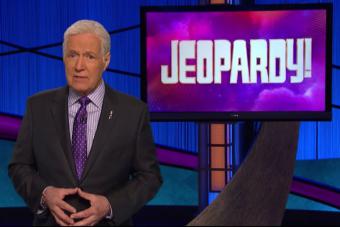 "I wish I had known sooner that the persistent stomach pain I experienced prior to my diagnosis was a symptom of pancreatic cancer," said Trebek in a statement.

Characterized by tumors which grow on the pancreas, pancreatic cancer typically is difficult to diagnose in its early stages and can include symptoms such as pain in the back or abdomen, weight loss, loss of appetite, jaundice and recent-onset diabetes. More than 56,000 people will be diagnosed with pancreatic cancer in the U.S. in 2019.

Some of ways to acknowledge World Pancreatic Cancer Day include: wearing purple on Nov. 21, raising awareness about the common symptoms of pancreatic cancer, and asking public officials to support greater government funding for pancreatic cancer research.

"On World Pancreatic Cancer Day, we unite as a global movement to advocate for early detection and better outcomes for pancreatic cancer patients," said Julie Fleshman, WPCC chair. "By raising awareness of pancreatic cancer risks and symptoms, we hope that people will be aware and alert their doctor sooner when there is more opportunity for intervention."