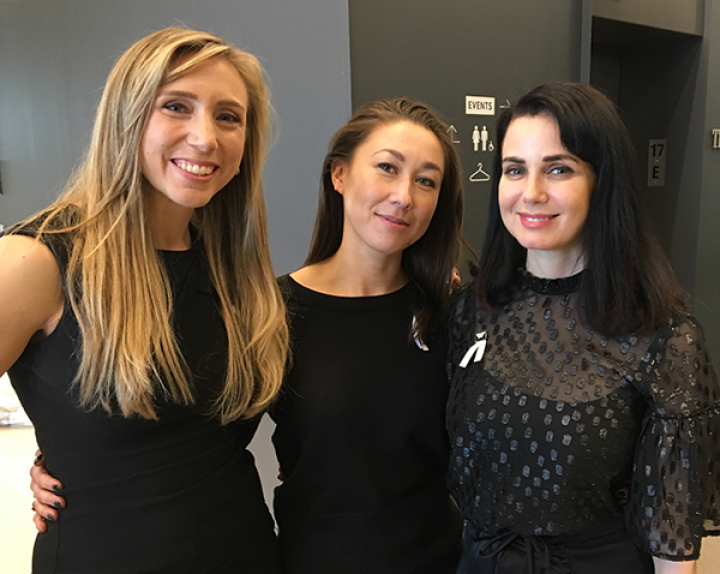 Action campaign AFTERMETOO — created by producer/director Aisling Chin-Yee, actress/author/activist Mia Kirshner, and actress/producer Freya Ravensbergen — has partnered with the Canadian Women’s Foundation to administer grants for a new fund to address the increase in demand on sexual violence support services across Canada. The goal is to raise $7 million.

The much-stressed support services, already underfunded, have seen an increase in people coming forward to report sexual violence or harassment and seeking help, especially since the start of the  #MeToo and #TimesUp movements.  According to AFTERMETOO, for example, calls to the Ottawa Rape Crisis Centre increased 100 percent in the last year alone.

The AFTERMETOO Fund will fund organizations that provide supports like mental health services, hospital and court accompaniment, and long-term counselling.  The Canadian Women’s Foundation empowers women and girls in Canada “to move out of violence, out of poverty and into confidence.” According to the foundation, it has raised money and invested in over 1,500 community programs across Canada, and is one of the world’s 10 largest women’s foundations.

AFTERMETOO was created by Chin-Yee, Kirshner, and Ravensbergen as a response to the #METOO awareness campaign. They held their first symposium on Dec. 5, 2017 in Toronto, in partnership with The Globe and Mail, comprising six roundtables (all filmed).

“We bought together experts and professonals from the entertainmentindustry, legal, traums, and psychologist experts, unions and associations, and organization and change and technology to dicuss the issues and barriers facing victims and survivors, and the current culture that supports the predator over the victim,” it reads.

Each table then submitted a list of recommendations that have been compiled into AFTERMETOO’s downloadable report on workplace reform related to sexual violence.

“This report is our roadmap,” it reads on the page that also includes the six videos.
“We need one now.
Many of us didn’t feel protected from workplace sexual violence.
Many of us were not protected from reprisals once we reported.
Many of us lost jobs.
Many of us saw that survivor supports were inadequate.
This report addresses how we can fix this.
This is how we make our workplaces safe.”

Key recommendation from the report include:

Create a fund to support counselling and legal advice for survivors in the industry;

Create an independent, national organization to address sexual violence in the industry;

Investigate cases of historical sexual violence in the industry;

Also on the AFTERMETOO web site, under “our fund,” are the following unattributed statistics:

43% OF WOMEN HAVE REPORTED BEING SEXUALLY HARASSED AT WORK.*

33% OF ALL CRIMES COMMITTED AGAINST WOMEN ARE SEXUAL ASSAULTS.*

10% OF ALL CRIMES COMMITTED AGAINST NON-INDIGENOUS WOMEN ARE SEXUAL ASSAULTS.

5% OF SEXUAL ASSAULT INCIDENTS ARE REPORTED TO THE POLICE.

3 SEXUAL ASSAULT CHARGES OUT OF 1000 END WITH A CONVICTION

(* ONLY 1 IN 3 CANADIANS HAVE A CLEAR UNDERSTANDING WHAT CONSENT IS).