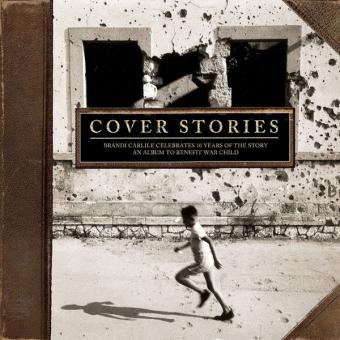 Pearl Jam, Adele, Dolly Parton, Kris Kristofferson and Jim James are among the artists reinterpreting songs from Brandi Carlile's 2007 album The Story, with all proceeds going to War Child UK, the organization dedicated to helping children in conflict zones around the world.

"Do you remember Sunday school? Goliath was a giant, he was undefeated, menacing and a paralyzing presence in his time," Carlile begins in a post on her website. "Goliath is our refugee crisis and the apathy it breeds. In particular, this giant is most devastating in that it is destroying the lives of the truly innocent, the hope of the world - children."

The first single is Pearl Jam's cover of "Again Today" and features Carlile on backing vocals. The just-released song will be one of 14 songs on Cover Stories: Brandi Carlile Celebrates 10 Years of The Story – An Album to Benefit War Child,  out May 5 on Legacy Recordings. Former President Barack Obama provides the foreword.

According to the press material Chris Stapleton plays guitar on Kris Kristofferson's version of “Turpentine" and Miranda Lambert sings  backing vocals on Anderson East’s take on “Josephine.” Dave Cobb produced the tracks by Kristofferson, Parton, and Price, while Patrick Carney of the Black Keys produced Ruby Amanfu. Carlile and longtime bandmates The Twins (Tim and Phil Hanseroth) produced the Secret Sisters and TORRES.

"Help us make this album a gift to kids and a way forward. Please buy Cover Stories, and if you can’t - tell fifty people about it, volunteer, put your weight into it. I don’t care if you’re right or left handed, wrap your fingers around this thing and launch the son of a bitch right at the evil eye."

Work on the covers album began last year through Carlile's Looking Out Foundation, which "amplifies the impact of music by empowering those without a voice. From neighborhood to nation, we help fund causes and organizations that often go unnoticed."

"This fantastic album will help fund our vital work — from supporting Syrian children to access education, to reintegrating child soldiers in the Central African Republic and working in juvenile justice in Afghanistan," said War Child U.K. CEO Rob Williams, in a press release.