5 Ways To Support Australia In Its Fight Against Deadly Wildfires 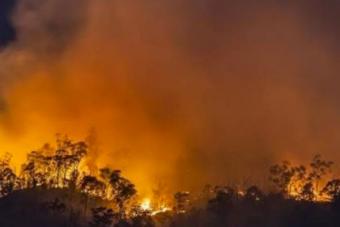 The widespread devastation from bushfires in Australia has reached unprecedented levels this season. Right now 2,700 firefighters and along with 3,000 army reserve and specialists have been activated to combat the 136 separate brush fires burning, 69 of which are considered uncontained.

Twenty-four people have died this fire season, including three firefighters. Over 1,300 homes have been destroyed and an estimated 14.7 million hectares — an area larger than the combined countries of Belgium and Haiti — have burned.

On top of everything else, a University of Sydney professor is estimating that 480 million animals have died in the state of New South Wales on the southeastern side of Australia. Government officials are estimating that one-third of Australia's koala bear population has died.

While the massive changes required to combat the climate crisis that has created these conditions will require coordinated, political, social and economic efforts there are a number of things individuals can do right now to support Australia. Mostly, this involves donating money.

Samaritanmag has made a list of five different ways people can be supportive:

Australia's Red Cross disaster relief and recovery fund: There's a reason why almost every major media organization covering major disaster events will direct potential supporters towards the Red Cross. It's because the Red Cross has extensive experience in dealing with disasters on a massive scale around the world. The Australian relief fund is being used right now to supporting thousands of people in evacuation centres and recovery hubs across Australia.

Fire Relief Fund for First Nations Communities: Created by Neil Morris, a member of the  Yorta Yorta First Nation, this GoFundMe is "to offer a culturally sensitive , specific direct  support" to Australian Indigenous people affected by the fires.

Extinction Rebellion Australia: This environmental organization is working towards resolving the climate emergency through events, protests and political action.