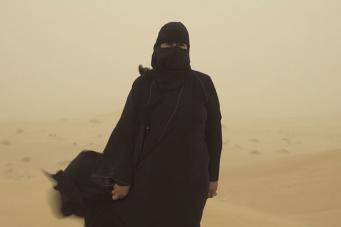 Five of the seven films being featured at the 15th annual Human Rights Watch Film Festival being held in Toronto April 18-25 will feature works directed or co-directed by women.

One of the directors featured in the film festival is Hissa Hilal, whose film The Poetess showcases her journey through a spoken word reality television contest where she champions women's issues and advocates against religious extremism in an Arab world that responds to her message with death threats. Another film, Silas, is co-directed by Anjali Nayar along with Kenyan actor Hawa Essuman. That film follows Liberian activist Silas Siakor, who's trying to hold the Liberian government accountable for a number of environmentally damaging policies.

Established in 1978, Human Rights Watch is a non-profit, non-governmental human rights organization that conducts "accurate fact-finding, impartial reporting, effective use of media, and targeted advocacy, often in partnership with local human rights groups." It has a staff of more than 400 dedicated to promoting human rights and justice around the world.

"Our festival is a wonderful way to understand the world we live in, with its problems and with its heroes who never cease exposing abuses wherever they may occur," said Helga Stephenson, chair of the Toronto Human Rights Watch Film Festival, in a press release. "It is a celebration of the human spirit, and of the ties that bind us around the globe. From Africa to the Middle East, from Eastern Europe to the LGBTQ+ world, this festival will inform you, shock you, and inspire you to become an active citizen as you meet some of the most extraordinary ordinary people who battle for human rights everywhere."

Other films in the festival series include opening night feature On My Way Out: The Secret Life of Nani and Popi, which follows what happens when a 95-year-old whose been married for 65 years comes out as gay; Muhi – Generally Temporary, which examines the Israeli–Palestinian conflict via Muhi, a young boy from Gaza who has a life-threatening immune disorder; What Will People Say, the story of of Pakistani-Norwegian teenager whose parents kidnap her and send her to Pakistan; This is Congo, a look into a country that has experienced an estimated five million conflict-related deaths in the last two decades; and, The Other Side of Everything, in which Serbian filmmaker Mila Turajlic uses her mother Srbijanka's journey to better understand that region's history of conflict.

At most of the screenings the filmmakers, Human Rights Watch researchers and/or subject-matter experts will be on-hand for conversations.

"In the current political context, we are elated to have such an empowering lineup for the festival’s 15th edition," said TIFF Artistic Director Cameron Bailey. "We hope that audiences will find the exceptional resilience of the subjects featured in the films re-energizing and inspiring, a reminder that individuals can — and do — make a difference."

Watch the trailer for What Will People Say